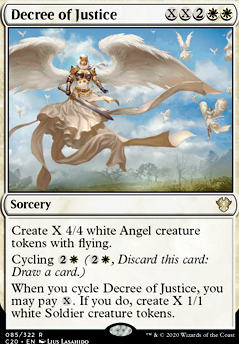 When you cycle Decree of Justice, you may pay . If you do, create X 1/1 white Soldier creature tokens.

zur stacks and taxes
by dimthewit

Draw your Victory
by Jking0808

Moonsilver Spear sounds like it fits the description of your deck. You could also consider Decree of Justice, despite its high mana cost.

Ula's there because I want a way to recover my library when I've cycled 30+ cards in a turn. Also protects from mill strategies passively, and with a discard outlet it protects from graveyard removal actively.

I didn't include Sharknado because it didn't provide value in play as a permanent, and until late game I rarely have enough mana to make the cycling worth it. See also Decree of Justice.

Suggestions for triggering non-human attack effect: Rise of the Hobgoblins

You're probably right in saying that I need to cut a few lands, I have more ramp cards than usual as well as having higher lands than needed. I think I should take out all the lands you mentioned instead of adding any more, because there were some cards that I forgot to add, which were Helm of the Host, Cathars' Crusade and Regna, the Redeemer, as well as Quest for Renewal which you mentioned.

This means that I need to take out 6 more cards, which probably be The Great Henge (seems more like a win-more card), Finale of Devastation (X has to be 5 or more to make it actually worthwhile in this deck I think), Sublime Archangel (If I have enough creatures for this to be worth it, I probably should be attacking with all of them anyway), Unclaimed Territory (I'll keep Cavern of Souls, but I think I can cut this one because I only have 20 Angels, not including things that can make Angels like Decree of Justice and Serra the Benevolent, which may be a problem as well) and Farseek (I probably have enough ramp cards).

PS: I also forgot to add Worldly Tutor and Enlightened Tutor, so I'll take out Savage Summoning and Scout's Warning for them.