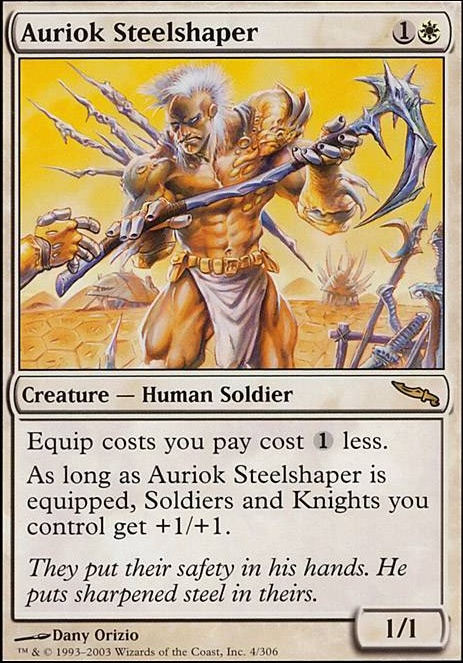 As long as Auriok Steelshaper is equipped, Soldier and Knight creatures you control get +1/+1.

AstroAA on Who is Your Favorite Tribal â¦

I've had several tribal decks in my life, namely being:

Brimaz, King of Oreskos tribal soldier. Many of the decks using him as the commander I've seen use him as a tribal cat general, but I think the soldier tribe fits him better because you can use anthem effects like Field Marshal, Auriok Steelshaper, and Knight-Captain of Eos to greater effect. I turned the deck into Adeline, Resplendent Cathar tribal humans/anthems, because I think she's a simply better Brimaz at being more aggressive.

Lyra Dawnbringer tribal angel. Angels are my favorite creature type in Magic, and I think she's easily the best general for the archetype outside of maybe Kaalia of the Vast. It wasn't very good, and I eventually took it apart because I never played it.

Celestial Kirin tribal boardwipe. It's technically tribal spirits, but I like to call it tribal boardwipe because it basically turns every spirit into a boardwipe. I built it on a $50 budget, so it's very unoptimized and pretty slow, but it's still fun to play in a more slower-paced setting. I still have it, and play it when my group does budget games.

Oona, Queen of the Fae tribal faerie. I built this deck to be more of a hybrid combo/tribal faerie deck, and it slaps. It's not as good as optimized Oona combo lists, but it still wins games. I still have it built.

If you couldn't tell I really like mono-white tribal decks.

This will give you a better chance at having a more explosive start.

Cool take on the deck, I think you're going with a light cat subtheme? But I see some issues with the list: Elbrus, the Binding Blade Â Flip's color identity is black, so it doesn't follow normal commander rules; Emeria Shepherd seems to be a bit too expensive to run with 35 lands; I'd suggest putting in Auriok Steelshaper, seing as you run several creatures that want to be equipped; you might want to include artifact and enchantment wipes, even though it'd seem counterproductive to do so in a deck like this- cards like Austere Command and Cleansing Nova. Happy tapping! :p

One formatting point, it should probably read: Equip costs you pay cost less to activate for each experience counter you have.