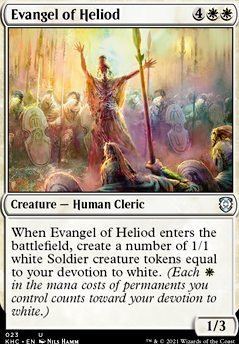 When Evangel of Heliod enters the battlefield, create a number of 1/1 white Soldier creature tokens equal to your devotion to white.

What about Reverent Hoplite and/or Evangel of Heliod? Do you think that they deserve a spot?

I'd also advise Sun Droplet and Knight-Captain of Eos.

Helm of Possession could be nice, too.

Evangel of Heliod for even more tokens?

The only reliable cards from the new sets for our deck are:

Reverent Hoplite which will replace Evangel of Heliod ; though one less white pip will not affect our devotion count by that much the creature type compensates as it will get the benefits of the tribal synergies in the deck.

Taranika, Akroan Veteran grants indestructibility to one of our utility creature or pump our commander even more; Tajic can now take two swings for lethal commander damage if not block.