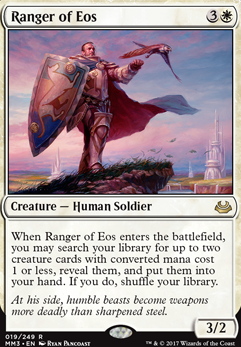 When Ranger of Eos enters the battlefield, you may search your library for up to two creature cards with converted mana cost 1 or less, reveal them, and put them into your hand. If you do, shuffle your library.

Krav and Regna Orzhov
by SHANKUMS

99 Problems and the Sun-Crowned One
by darth3802

You're Tearing Me Apart Liesa!
by onestone1123

Seconding zapy, the most effective soul sisters stuff I've seen has been built around cmc 1 matters - Ranger of Eos is notable.

Arcangel of thune sounds like a great top-end to the package, but 5 cmc is a lot compare it to say, Aetherflux Reservoir, which is often set up to win in similar situations while being harder to remove. Heliod offers similar pressure at 3 cmc while threatening Spike Feeder combo.

Cleric Class is a cool tool from the most recent set, which alongside Trelasarra, Moon Dancer points to a green/white build. I could see Gaddock Teeg maindeck to fight against a lot of more recent high cmc cards- shutting down the x cost path is nice.

Hey blessrain -- Walking Ballista is definitely at it's most fair in this deck but it serves a few cool use cases. It has a unique role in the deck where it can act like Umezawa's Jitte w/ counters and ping off some creatures or act as just a bear that can send a few points of damage at the opponent if it is about to be removed. In both cases it is pretty solid, mono-white can use the extra reach sometimes.

a) Tutor target for both Recruiter of the Guard and Ranger-Captain of Eos , and also Ranger of Eos that is in the maybe board. It's usually the best target for Ranger-Captain if the game is going to go long at all or I have some excess mana that I can feed into the Ballista the next turn. Would likely add Ranger of Eos if I was going into the Heliod combo just to maximize on ways to find Ballista.

b) Can help mana denial strategy. Pinging off x/1 creatures is really helpful when half of the payoffs in this deck involve removing the opponent's resources. Pinging their Noble Hierarch or Birds of Paradise leading into an Armageddon / Wasteland to choke out certain colours or an early 3 drop is exactly what we want to do to maximize our disruption.

c) Goes well with the fast mana draws, whether it is Mana Crypt or City of Traitors , Ancient Tomb , getting an early Ballista against creature decks is great for the reason described above, plus it can be a mana sink later while fitting the curve early.

I've been looking to add more +1/+1 counter synergy as well, both Anafenza, Kin-Tree Spirit and Luminarch Aspirant are underrated and there are a few other cards I have been looking at too. I think in a slower meta including the Heliod, Sun-Crowned combo is a very valid build, too. Heliod is just a little bit weak on his own but it is a good card to slam early off a fast mana start. Ballista is just a good enough card on its own that I have really embraced playing it in a deck like this!

cfost827 I played Kokusho, the Evening Star for a while, and he was strong when he hit the board, just slow. I ended up taking him out cause I wanted a faster curve. Yosei, the Morning Star was always too stax-ey for my liking. He would slow down games a lot, and it didn't seem fun, but he's definitely powerful. For power level, I'd add Yosei, but for fun, I'd add Kokusho. However, I find that the deck runs much smoother when we don't have 6 mana creatures.

I like Carrion Feeder mostly because its a creature. It can be tutored for with Ranger of Eos and Recruiter of the Guard and can be recurred. Spawning Pit is a good sac oulet though. It's only 2 mana and can provide tokens as we sac things. Victimize is probably what I'd replace since its not a great sac outlet, and I recently put in more recursion in the form of Brought Back and Second Sunrise .

Also Recruiter of the Guard Ranger of Eos and Ranger-Captain of Eos as your deck has plenty of targets for them!

Ranger of Eos Ranger-Captain of Eos and Recruiter of the Guard would be good as well! Tutors for your Ugin's Conjurant and allows you to play it on curve with your commander! Also gets as combo pieces/ silver bullet spirits! (like Kami of False Hope in a pinch, Walking Ballista for the combo finish)