+1: Put a +1/+1 counter on up to one target creature. It gains indestructible until end of turn.

-2: Whenever one or more nontoken creatures attack this turn, create that many 1/1 white Soldier creature tokens that are tapped and attacking.

-6: You get an emblem with "At the beginning of combat on your turn, create a 1/1 white Soldier creature token, then put a +1/+1 counter on each creature you control. 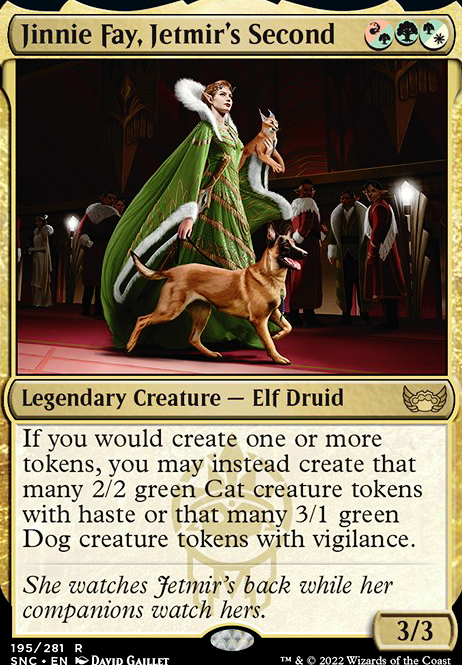 Nice name, kamarupa! Buddhist or Hindu or Jain or otherwise??? Anyways, the entire reason I have Basri Ket is for this very reason. Thanks a bunch for your according suggestions that are actually what I would like to play. Color protection is nice, but I honestly don't know how that would work with two or more colors? If there's, say, a Selesnya card, would protection from white or green protect entirely against that card? I know that this is a newbie question, but regardless haha...

lhetrick13 and Bulldawg1310 Thanks so much for the suggestions. For some context, this deck was based on my even less focused old deck. I wanted to redo it and most of these cards were ones I already had. As for the focus, Iâm more sold on the tokens and healing. I have so many counters mostly because my main token generators (Iridescent Hornbeetle and Mycoloth) used them so Iâm happy to drop that. I quite like the look of Brimaz, King of Oreskos and Basri Ket. One note that I would like to add is that I want to keep the deck relatively cheap. Or at least have small chunks of new cards to buy in order to improve it. Once again thank you so much for the comments and I'm excited to see where we can take this deck.

TheStoneRaptor - I have a few suggestions I can share but keep in mind, I am by no means an expert so take all my advice/suggestions with a grain of salt.

Hopefully something I mentioned you will find helpful. If seeing something similar might help, I do run a +1/+1 counter deck (I'll Raise you +1/+1...) and specifically a cat theme token deck (Feline Feelings. Take a look at those for some inspriation. They are not perfect by any means by they are fun an effective.

Â Â Â Â Â I'm actually already running Bramble Sovereign haha. Camaraderie is actually a new addition to the deck. I wanted another tool that could draw a handful of cards in one shot, but I think I'm actually going to swap it out for Garruk, Primal Hunter.

Â Â Â Â Â Mimic Vat is a card I've never had much luck with, but I do really like the idea of Timeless Witness! Basri Ket would be pretty good here, gonna mull that one over.

So a couple things you just changed commander and haven't completely shaken off the lifegain theme. Comradeeri for instance. That's all I noticed.

There are plenty of card draw options for this type of deck just choose what works for you.

Unless it's for meta I'd suggest not run the 3 enchantments like darksteel mutation. White has a ton of good removal options.

Although I like populate you need a good creature to copy for it to be really worth it. Like eternalize creatures that have good etb like Timeless Witness or Mimic Vat copy anything that died or Bramble Sovereign copy entering creatures

Basri Ket also a good plainswalker for this type of deck.