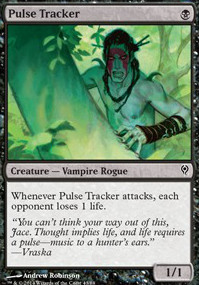 I have a very similar deck that I'm still working on, but I really like Drana's Emissary . I also have Pulse Tracker in mine which is nice because it deals one damage to all players when it attacks which can trigger cards like Exquisite Blood and Cliffhaven Vampire . I might replace vampire cutthroat with ally or a card like pulse tracker. also trespassers curse could use another copy. I also agree with Elmoisamac about run-in x4 of good allies.

I never noticed Vicious Conquistador before. Looks like an upgraded Pulse Tracker, which makes it good. I'd move some more in that direction. You really want to be pretty sure of a 1-cost creature in your opening hand and a 2-cost creature or two 1-cost creatures for your second turn. You want to be getting some hurt in before the opponent starts dropping bigger creatures. When they do, you want to be using inexpensive removal on their better creatures (Doom Blade, Smite, Victim of Night, etc.) or evading them (Vampire Nighthawk, Gruesome Deformity, etc.) to keep the pressure on and finish them quickly. Don't over-focus on life gain and defense. A little can give you an edge; too much will deprive you of focus. If the opponent is given time and room to fully develop his/her game plan, the extra life will only slow your loss by a turn or two, not prevent it. Embrace cards like Sign in Blood, which lets you trade those life points for something you need more, cards. It can also be used to get in a couple of points of unblockable life loss on an enemy, but that's not the most common use. Keep in mind that the only life point that matters is the last one.

Welcome. This deck looks fun. +1 I might suggest a little less emphasis on life gain and a few more creatures and damage-dealing effects. Silence, as 1-of control type card, is a good candidate for replacement. Your mana curve looks good to me, but most of your 1-cost cards are ones that won't be played on the first turn, since they do things like bring creatures back or buff creatures. I'd look at swapping in a few 1-cost addressive vampires like Pulse Tracker or Guul Draz Vampire. Casual is my favorite format; the beauty of it is you get to do your own thing and come up with your own ideas. I think of it as kind of like budget Vintage in a way. Enjoy!