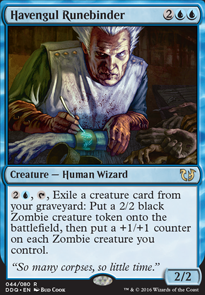 The Deck Formerly Known as Grimgrin's Free Zombies
by norbertrox

GreatSword on Exile a creature from YOUR â¦

Play a lot of Magic, either IRL or on Magic: Arena, or read the entirety of the Comprehensive Rules:

Learning the whole rules is part of every player's journey. Feel free to ask anything else.

Caerwyn on Exile a creature from YOUR â¦

I wanted to build on Neotrup's answer some since your follow-up post indicated you are a bit new to Magic.

Havengul Runebinder 's ability is what is known as an "Activated Ability." In order for an Activated Ability to be used, its controller* has to pay a cost to use the ability.

The cost is everything that comes before the colon (:) on the card. So, in this case, there are three parts of paying the creature's cost: (1) paying ; (2) tapping the creature; and (3) exiling a creature from your graveyard. You have to pay the entire cost or you cannot use the ability. The effect is everything that comes after the colon, and will be what occurs if the ability resolves.

Also, one important piece of information that was not mentioned--unless specified otherwise, activated abilities can be used at the same speed as instants. To provide one example where that would be relevant: your opponent attacks with a creature--you could activate this ability after they have declared attackers, but before you have declared blockers, and suddenly you have a surprise 3/3 on the battlefield ready to block.

Also, unless my post generated any follow-up questions, please hit the "Mark as Answer" button on Neotrup's post to let others know your question has been resolved.

rammiehamster on Exile a creature from YOUR â¦

I have the Havengul Runebinder creature card. It says I need to use additional mana to "exile a creature from your graveyard". This seems strange to me and I have 2 questions

1/ do I HAVE to do this if I play the card 2/ what is the advantage of exiling a creature from MY graveyard? surely this is a disadvantage to me?

Thanks in advance for any help :-)