Swampwalk (This creature can't be blocked as long as defending player controls a Swamp.)

At the beginning of your upkeep, return target creature card from your graveyard to the battlefield.

At the beginning of each opponent's upkeep, that player sacrifices a creature. 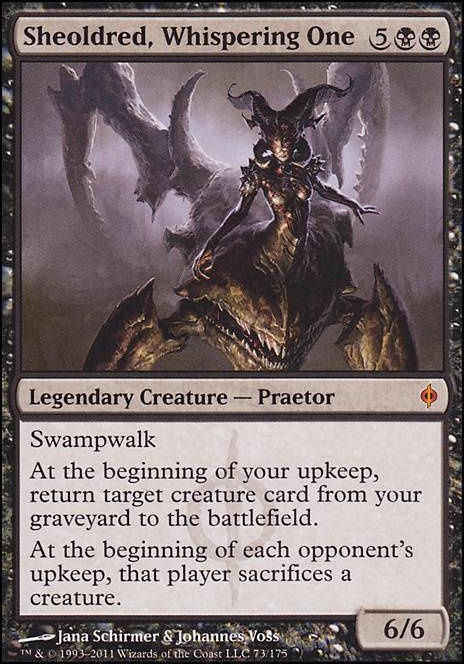 #5 Countess Of The Graveyard
by Okita_Souji312

Profet93 You are right about the Sheoldred, Whispering One I dont want to cut her, but she is probably on the chopping block because of the CMC. Now for the Fellwar Stone , Exotic Orchard ect, they are for Praetor's Grasp to steal kill cards such as Thassa's Oracle

I am thinking about Necropotence I might play test it first .. The exile on discard is a rough.

Thank you very much for the help

correction of a spieling error**

I like cards like these with Damia since they get her out faster and help to empty your hand once she's out: Sakura-Tribe Scout, Skyshroud Ranger, Broken Bond, Swell of Growth, Azusa, Lost but Seeking. And they all feature ladies!

You might like these too: Alexi, Zephyr Mage, Diplomatic Escort, Silverglade Pathfinder, Go for the Throat (the promo art is also nice), Alluring Siren, Complicate, Fauna Shaman, Meren of Clan Nel Toth, Calming Verse, Song of Freyalise, Sheoldred, Whispering One

I like the idea of Griselbrand but I also like Sheoldred, Whispering One. How many copies do you think I need?