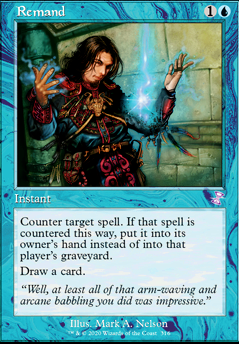 Counter target spell. If that spell is countered this way, put it into its owner's hand instead of into that player's graveyard.

Remand occurrence in decks from the last year 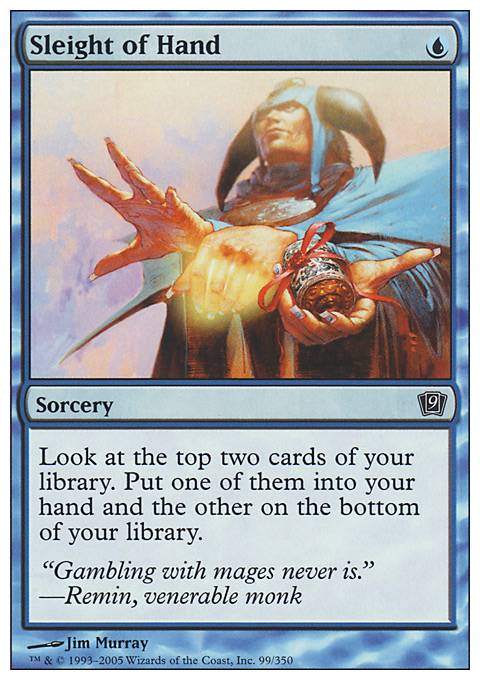 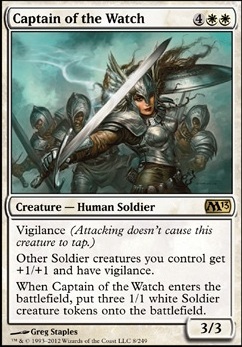 Nice! These are some good ideas and I actually own a lot of these cards (no Snaps though, oi vey). Hmm having been on the other side of targeted hand removal I know it can be really devastating. I also know things like Remand can be horrifying to play against when used with Isochron Scepter . I once got completely locked out by a guy running that combo in mono-blue and almost quit the game after. I hadn't thought about the black sweepers at all though! I have some copies of Damnation in some other decks and they are way too expensive now so maybe running some Languish or Ritual of Soot wouldn't be such a bad idea after all?

Hmmm given me a lot to think about!

Caran_Lyg Myth is great in this deck, but you donât want to draw more than 1-2 copies throughout the game. Having the full playset increase the risk of drawing too many late game. Riddleform is cool enough, but a little too situational for modern power level.

You need to be experienced with Remand in order to understand its usefulness. The reason why you play it in this deck is mainly because of Myth - a card that cares about drawing cards (more cards = potentially more counters). Two mana counters also works really well with T5feri. Casting him turn five, and counter your opponents answer with Remand is a huge tempo win.

I still donât understand why people love using Remand it draws you a card but brings back their spell to their hand they can use again later. I donât see why use it if thereâs no interaction for it.

Love Thing in the Ice Â Flip for most blue decks.

Downside of Brazen Borrower is that it only targets an opponent's permanents and there's good reason to want to target your own in this one. Still, I'd like to find a place for it. Remand maybe? Hm...

For what its worth, once you get the hang of it, how all of the popping in and out can be used, this deck is an absolute blast to play and a nightmare to play against... though with all the interaction I'm not sure how easy it would be to play online, mechanically speaking.