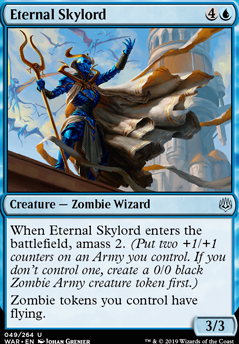 When Eternal Skylord enters the battlefield, amass 2. (Put two +1/+1 counters on an Army you control. If you don't control one, create a 0/0 black Zombie Army creature token first.)

Zombie tokens you control have flying. oh, So yOU waNt TO PLay MTG?
by JackNavi 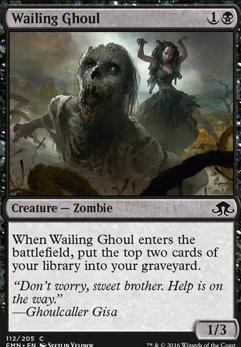 Bored to Death
by Ephlesh Josu Vess, Lich Knight is not good because without the overload is really poor.

On the other hand Undead Alchemist is actually good in my humble opinion because creatures that hit the graveyard from library gets exiled. There is a mill sub-theme in the deck and without this card i would then replace all the other mill cards.

Liliana, Dreadhorde General is nice, probably not essential here since the draw compartment is already sweet (maybe could replace Graveborn Muse since is a risky cards sometimes). Her ultimate is super solid and can win matches so may deserve a try.

Gleaming Overseer and Eternal Skylord are good. Probably not in this list because it already has the best zomby creatures available so it would be hard to find a spot for them. I personally don't like really much Fleshbag Marauder honestly because often your opponents have a creature they can sacrifice without hesitation like a token or something like that but it's a solid card obviously.

Prismatic Vista is great and could make the spot.

Why the zombie knights? They don't get buffed by Eternal Skylord or Gleaming Overseer

I don't like Relentless Advance . It's narrow and only 3 power for 4 cost.

Eternal Skylord in the playtester can't Amass. What I mean by this is that when you scroll through tokens, Zombie Army doesn't show up when Eternal Skylord is the only Amass card in the deck.

Also, as a side note, Frontier needs an update. It considers most cards past Aether Revolt or Amonkhet as non-Frontier legal. This needs to be fixed, even if I am the only one who still gives two craps about it. Other than that, TappedOut is an amazing website. Glad I found it.