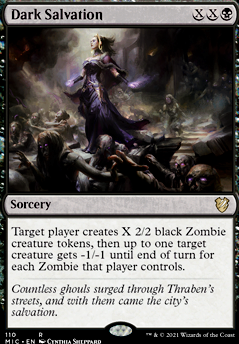 Target player creates X 2/2 black Zombie creature tokens onto the battlefield, then up to one target creature gets -1/-1 until end of turn for each Zombie that player controls.

Grisly Ghouls from Every Tomb
by Rossamo

Would any of the zombie token spawners be helpful? There's a lot that just spit out hordes and hordes of zombies for you to sacrifice.

Stuff like Open the Graves , Army of the Damned , and Dark Salvation come to mind.

You might need some more creatures for Open the Graves to work, though recurring creatures like the Squees are pretty good to keep fueling it.

Board Wipes (2/5): In Garruk's Wake, and Zombie Apocalypse.

magwaaf, I like having just a copy floating around. I have 4x Dark Salvation + 2x Fatal Push, and that seems to be enough removal before sideboard. It's personal choice-- feel free to swap in your choice in its place. There are good arguments to include a third copy of Fatal Push for those who want to. In short, 1x Agonizing Remorse is a personal choice and not much more.