Wrath of the Sun god
by Cloudchaser.Kestrel 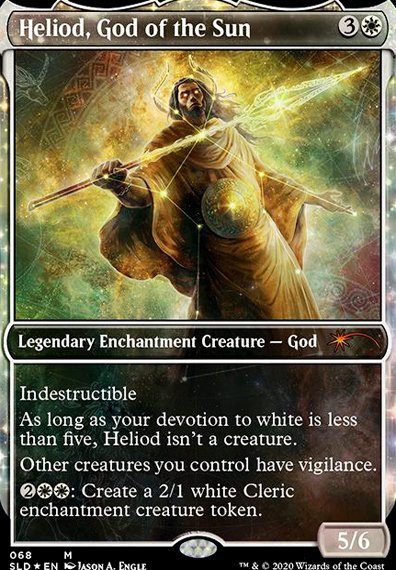 Heliod, God of the Sun Discussion

Rhadamanthus on Does The Prismatic Bridge work â¦

You can use double-square brackets around a card's name to create a reference link. It's the best way to help make sure everyone understands what's going on in your question: The Prismatic Bridge, Heliod, God of the Sun (as an example)

plakjekaas on Personal Play moments you are â¦

Overcoming Cruel Ultimatum being cast targeting me three times in a single game, with a mono White deck. I had nothing but lands, an Extraplanar Lens, a Land Tax, a Skybind and my commander, Heliod, God of the Sun. Note that the Cleric Tokens you create, are Enchantment Creature Tokens, and they trigger Skybind. I was able to blink every problematic permanent that threatened me, even though I had no hand and was pretty low on life. After 5 turns of desperate chump-block-blink-stalling, I found a Sun Titan from the top, and was able to grind it out from there. The lifegain of Authority of the Consuls really kept me alive through that. Feels like my most deserved win ever ^^

Glad to help! What about OG Heliod, God of the Sun , who makes cleric tokens? Or even Athreos, God of Passage for getting back the clerics who die?

An important aspect of creatures entering tapped is that it shuts down basically any combo with Kiki-Jiki, Mirror Breaker . That's why I like Authority of the Consuls especially. Even though it only hits creatures, the lifegain and the lack of surprise blockers and hasty attackers just grants you so much time to execute your own game plan. It's a great deal for just 1 mana. I even sideboarded it in standard. It saved you effectively 6 life against active Hazoret the Fervent . It made summoning sick creatures unable to crew vehicles. Gideon, Ally of Zendikar didn't protect himself half as good anymore. I'm a big fan. I even have a mono white commander deck that uses these effects combined with Meekstone , Marble Titan , Juntu Stakes and Crackdown to disable most creatures forever. Combined with Heliod, God of the Sun , granting your team Vigilance, as the commander, combat will be easy for you. Just make sure that the effect is asymmetrical, that's the best about Kismet .