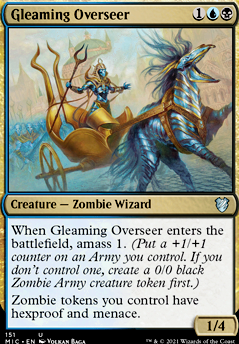 When this enters the battlefield, amass 1. *(Put a +1/+1 counter on an Army you control. If you don't control one, create a 0/0 black Zombie Army creature token first.) *

Zombie tokens you control have hexproof and menace. 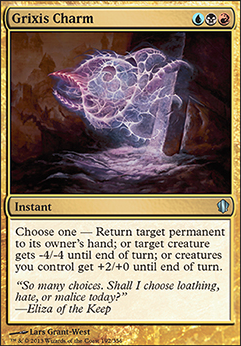 Omniscience_is_life Long have I pined to have a Mindless Null as the commander. And yet, something always halts me, deep within my heart. I cannot confine such a great object to such a.. low position.

All jokes aside, glad it got added, and you might be seeing a Gleaming Overseer deck pop up at some point in the future.

Thank you for the advice. Please check out the revised deck and tell me what you think. I revised it prior to seeing your comment so the Gravecrawler infinite isn't in there but it is definitely intriguing. Look forward to hearing what you think. Oh and the Amulet of Vigor isn't just for the bounce lands it makes it so the zombies created with the curses enter untapped and assuming that I have something like Gleaming Overseer out makes them good blockers with the hexproof, amongst other things that are coming in tapped. 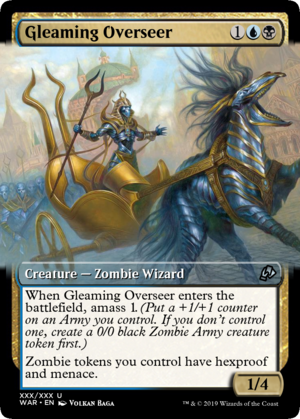