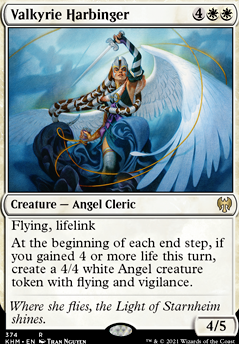 At the beginning of each end step, if you gained 4 or more life this turn, create a 4/4 white Angel creature token with flying and vigilance. 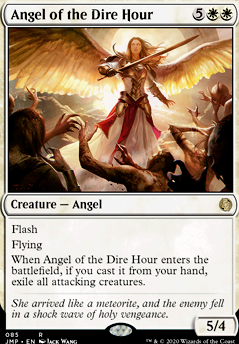 My hesitancy on Blade Historian is only that things are tight as-is and it it neither Angel nor soldier. But that Double Strike... Still looking for wiggle room for a few things. Valkyrie Harbinger and Tithe Taker and Constable of the Realm especially. But still...

Xenopigeon, thanks for the support. I did actually notice the price increased by about 200$ or so within the last year, so I highly recommend proxying it.

As for lifegain, it's okay, but it definitely plays pretty greedily when it comes to the lifegain package (there isn't really one). When Bolas's Citadel comes out, it can really hurt sometimes so add some lifegian for sure if you feel it needs it. I'd personally run Windborn Muse over Archangel of Tithes because a lot of our creatures have flying and combat damage to face isn't one of the main concerns.

As for Valkyrie Harbinger , to me it looks like a double costed Resplendent Angel . Yeah it can trigger itself, but remember that Liesa should be in play pretty much always thanks to its tax cheat, and she has 5 power for Resplendent. I'd say it's an okay budget alternative, a bit expensive though.

I managed to get a test game in yesterday and that combo of having Bishop of Wings and Righteous Valkyrie was gaining me so much life. I still like the idea of Spirit Mantle over Light of Hope for now but with all that life gain, I wasn't doing much with it. I am going to try running another Valkyrie Harbinger and see if that helps. Otherwise I may try to make room for a 3rd Angelic Accord .