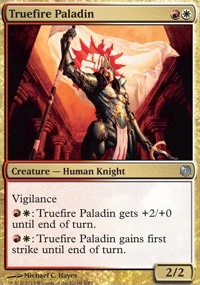 knight of the round table
by TheBawzzett 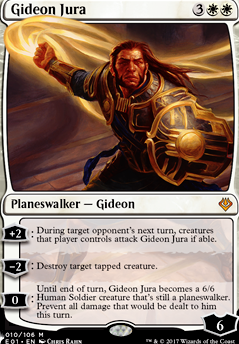 Student of Warfare is a better mana sink than Truefire Paladin and you can probably cut your non History of Benalia enchantments for knight of the white orchid.

As for sideboard, I can't think of much but 2 Grafdigger's Cage would probably be good.

i agree. take out the 6 cmc spell. add two lands, so you can cast the 5 cmc spell. I would do Boros Swiftblade before Truefire Paladin. also, look at War Flare. take out Deflecting Palm, maybe put two in the sideboard. it is only great against like two meta decks. check out my RDW lava spike, vorpalaxe. think about Wrath of God too.

Boros Reckoner , Doomed Traveler , Truefire Paladin, Soulfire Grand Master , Grim Lavamancer , Kari Zev, Skyship Raider , Boros Charm , Figure of Destiny , Blasphemous Act and Banishing Light are some cards that can fit in and most of them are quire inexpensive.

Hey, just a few suggestions for budget boros weenie that I think are worth having a think about.

Doomed Traveler isn't a bit hitter, but is removal and wrath protection, and can teach about card value. Dragon Hunter, one mana 2/1 with a slight upside, can't complain about that really, basically an Elite Vanguard. Goblin Glory Chaser is a one mana 2/2 menace (in theory), a different mechanic to play with, and can hit hard. Another new mechanic for the deck, and another lesson in value are Nyxborn Rollicker, and Nyxborn Shieldmate. Another 2 power for one mana is Rakdos Cackler, not very thematic but fits for power and colour. Then there is the boss of weenie, the awesome top man himself, the Selfless Cathar! So much love for him. He's a great card for new players to play and learn with.

When building a deck that is going wide then Akroan Hoplite can get big. Not all that exciting but Cerodon Yearling is fast at least. Teaching about value and the dangers of going wide, you can have cards that go tall such as Sunhome Guildmage, and Truefire Paladin a bit as well.

If the deck has some boosts then Iroas's Champion is cool, or another fast card with Skyknight Legionnaire

I'm not excited by the enchantments you have, I'd rather individual ones that can boost them over cards that have little effect, or are defensive such as Brave the Sands. Just go aggressive with things such as Ordeal of Purphoros, and Madcap Skills. Swap the three mana Fervor for the awesome Expedite. It does what you need by not slowing you down later on, it allows you to run fewer lands (curving at two or with a few three drops I'd be happy with 20 lands), and it doesn't cost you a card. If you were spending more on it then Legion's Initiative is all sorts of awesome.

Just a few things to think about.