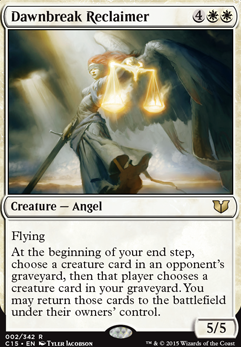 Dawnbreak Reclaimer occurrence in decks from the last year

Cute idea! I should do this with my group!

Some worthy includes: Azor's Elocutors (22cents), Droning Bureaucrats (5cents), the Offering cycle of cards (~$1.50 each), Obzedat, Ghost Council (50cents), Trusted Advisor (5 cents, can let you get more uses of Graft and more energy counters), Dawnbreak Reclaimer (55cents), Guided Passage ($1.75 but the ultimate politics card), Rags//Riches (17 cents), sorry can't figure out how to format that one for tapped out to be happy.

A couple cards that you might not have looked at that won't cost too much:

- Dawnbreak Reclaimer for recursion, in multiplayer

-If you're gaining life a lot, Dawn of Hope for card draw

I just put this deck together after a long time of mulling it over, i'll be uploading my own list soon. Some staples you're missing include Angel of Finality and Angelic Field Marshal , those two can be good if you want to stay budget. If you can drop a fat 100 on this deck you should definitely pick up the 'hate bear' angels, they might not be very good for your casual environment though. Linvala, Keeper of Silence and Iona, Shield of Emeria are both very good. Dawnbreak Reclaimer is a stupid good card and isn't expensive.

TagRag : Dawnbreak Reclaimer is not missing. It's printed in two expansions, Commander 2015 (C15) and Commander Anthology 2018 (CM2) which it's listed on.
I can't fix Prowling Serpopard because the subtype "Cat Snake" does not exist in the database.

Thanks SomaCruz, lots of great suggestions here. I really wrestled with the angel decisions for this deck - there's so many amazing ones. I debated as to whether or not I should include each of the ones you've mentioned so I'll try to explain the 'why' behind my omissions.

Angel of Jubilation is excellent, love the casting cost and lord effect but she didn't make the cut because I need to be able to pay life for one of my win conditions, Aetherflux Reservoir . Angel of Condemnation and Angel of Sanctions are good removal options, but ultimately I decided that I'm running enough removal. I may revisit that line of thinking if it becomes a recurring problem, perhaps replace Angel of Serenity with one of these cheaper, less win-more options. Now having said that, looking at Admonition Angel again, yeah. That needs to be in here. You're also right about Angelic Skirmisher so I think I'll take that out and swap in Angelic Field Marshal , good call. Sunblast Angel is awesome and is indeed in here already. I thought about Karmic Guide and Dawnbreak Reclaimer as recursion options but I am actually comfortable with the current recursion amount ( Bruna, the Fading Light

Dawn of Hope and Smothering Tithe make a lot of sense and should probably be in here, I'm just not certain what to cut for them yet. I'm luke warm on Geier Reach Sanitarium and Inventors' Fair in here but I see what you're getting at, likewise with Weathered Wayfarer & Expedition Map .

Thank you for the good ideas and let me know when/if you post your Lyra deck, I'd be keen to check it out.

I would say it probably needs a touch more removal so your game plan is not disrupted. I have my own angel deck which goes wide in typical Timmy fashion, however; it crumbles in a 3v1 scenario. I would maybe add one or two board wipes, staples removal spells like Return to Dust, Swords to Plowshares and Path to Exile. a good board wipe needs to be versatile like Austere Command or can act as a really good deterrent such as Nevinyrral's Disk

Some good angels to get for this deck are the Admonition Angel, Linvala, Keeper of Silence and Iona, Shield of Emeria pus it would be a funny combo with your Helm of the Host. Another angel I would recommend is Dawnbreak Reclaimer since it is reanimation plus you can make deals with opponents to get your good stuff back. Grand Abolisher is a must have in any angel tribal since it is kind of annoying if all your high value angels are countered for 2 mana. While I like Crovax, Ascendant Hero, If you wanted to; Elesh Norn, Grand Cenobite is simply better and for more value plus it buffs all your creatures regardless and kills all your opponents 2/2's (which 90% of the time would be hatebears like Thalia, Guardian of Thraben or Ethersworn Canonist or any other annoying af enemy) plus it kills Arcum Dagsson so theres bonus points (seriously, screw that Dagsson guy).

in terms of mana rocks, Sol Ring is a staple, to get some of the higher end Angels I would recommend mana rocks such as Thran Dynamo or Worn Powerstone since adding one coloured mana in a mono colour deck such as angels simply doesn't do enough. adding tons of colourless mana to pay the generic cost of angels is worth it though.

Overall I would say this deck gets an upvote for how fun it looks and for potential and versatility.