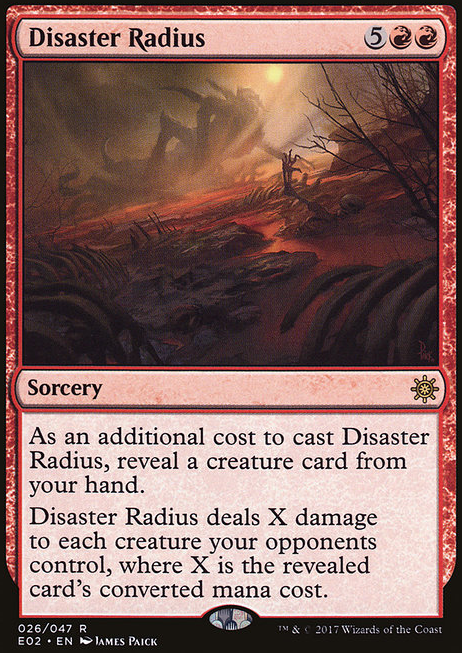 As an additional cost to cast this spell, reveal a creature card from your hand.

Disaster Radius deals X damage to each creature your opponents control, where X is the revealed card's converted mana cost. 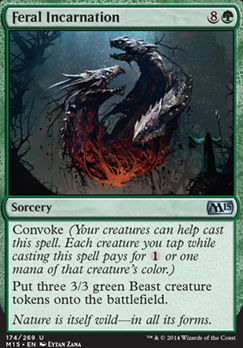 A few suggestions (if accessible)...

Decimator of the Provinces , Ulamog's Crusher , Breaker of Armies , Hamletback Goliath , Ruric Thar, the Unbowed I think are all good budget suggestions. If you have a few dollars you could work up to Siege Behemoth , Elderscale Wurm , and Vigor would be some solid uogrades.

Drumhunter and Lifecrafter's Bestiary are budget draw engines for decks like this (even if Bestiary doesnât work off of Mayaelâs ability). Also, Congregation at Dawn is a super hawt budget tutor for any Mayael deck!

I ran a Zhur-Taa Ancient and Disaster Radius as some other janky options as well.

Hey I got some inputs you may want to consider. Of course every deck's performance is closely related to the meta you're playing, but these are some things I think can help.

TheNocholas thank you for the suggestions! Iâm going to get rid of Disaster Radius and a mountain for Valakut, the Molten Pinnacle and Warstorm Surge, they kinda just seem like direct upgrades to those cards

My buddy runs Avacyn, Angel of Hope and Iona, Shield of Emeria. I know they're both 3 white but they works well in his deck. I've also seen Disaster Radius work miracles in Mayael decks too.

If you don't mind using an infinite combo, Palinchron would be a good add (though a little pricy, around $25). Can give you infinite mana with Deadeye Navigator, or infinite mana and Palinchron copies with Riku.

I would also suggest using Blasphemous Act over Disaster Radius, and Cyclonic Rift over AEtherize.

I like running the treefolk package too: Treefolk Harbinger, Deadwood Treefolk, Woodfall Primus, and Lignify. The Harbinger can then tutor for whatever answer you need.

Flametongue Kavu can also be pretty good, and Biovisionary is a fun win mech with clone effects.

You can check out my deck if you'd like: Riku of the Infinite ETB Triggers