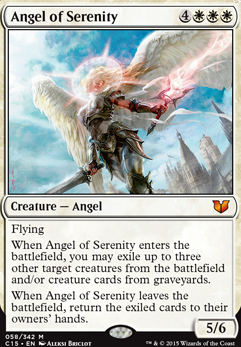 When Angel of Serenity enters the battlefield, you may exile up to three other target creatures from the battlefield and/or creature cards from graveyards.

When Angel of Serenity leaves the battlefield, return the exiled cards to their owners' hands.

Angel of Serenity occurrence in decks from the last year

Testing out a couple of cards Iâve had my eye on the past few of years. Going to swap out Detention Sphere for Eerie Interlude and see if I like the extra blink/protection. This decision has been a long time coming. After hundreds of games over the past 5~ years of me using Brago, I think I used D Sphere 3 times? I have other modes of removal in the deck, and would prefer a extra means of blink value and protecting Brago from a board wipe. The other change is Lyev Skyknight, a long time pet card of mine, to Soul Herder. Loved Skyknight in RTR block, one of my favorite cards, but I think that having more blinking options would help boost the speed of the deck. The next couple of changes Iâll likely make after I play a few test games with the new cards will be Out: Dissolve Angel of Serenity and In: Disallow Agent of Treachery. These changes will be made at a later date.

Cut Angel of Serenity and Aegis Angel for Segovian Angel and Verge Rangers. My advice is that you cut some of the 6 CMC cards for CMC 1 and 3 cards.

Also some Angels that may be good for your deck are Angel of Jubilation, Angel of Serenity, and Lyra Dawnbringer