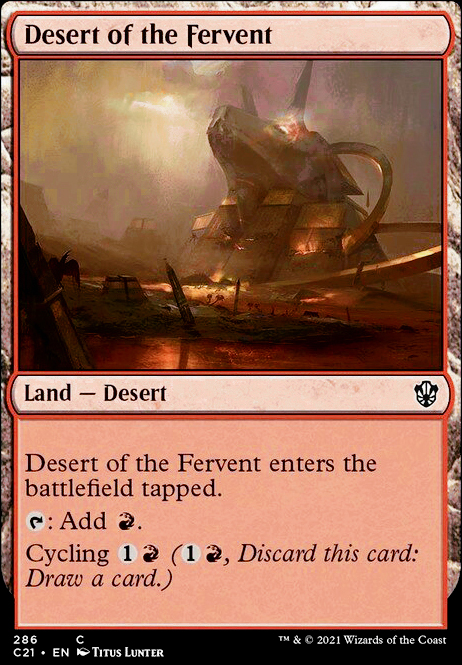 Desert of the Fervent enters tapped.

Desert of the Fervent Discussion

Bear to be Vanilla

Awesome deck, I love Ruxa, both art and mechanics, WotC did a good decision with this card! Maybe I try to play him in the future when I end with other deck projects.

*I think you mistaked by putting Desert of the Fervent (It's not legal in your deck due to color identity. Maybe you wanted to put Desert of the Indomitable ) You also did well by removing Farseek . It's an awesome ramp card, very good in any multicolor deck, but useless in mono green as it can't search forests.

Another land card you could use is Bonders' Enclave , similar to war room. In your deck your commander has 4 power and many other creatures and tokens will have it too so will be easy to use.

I also think Arcane Signet (Again, nice card but better in non-mono green decks) is not necessary in your deck, unless your playgroup plays heavy Mass Land destruction. If that's not the case, better add Nature's Lore or just Rampant Growth . They will grant you ramp in form of lands, wich usually are more durable than an artifact, and in your deck you play Landfall cards like Rampaging Baloths. Or if you just want to be fast, Wild Growth .

Hope something is useful! :)

Ruin of the Fervent

Inspired by Hazoret's Monument and Desert of the Fervent. Make it a cycle or make a wildcard.

Desert of the Fervent could be replaced by Forgotten Cave .