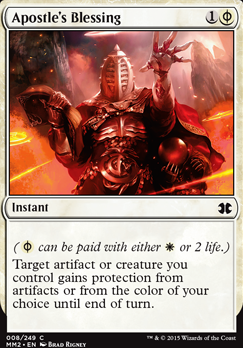 Target artifact or creature you control gains protection from artifacts or from the color of your choice until end of turn.

Apostle's Blessing occurrence in decks from the last year 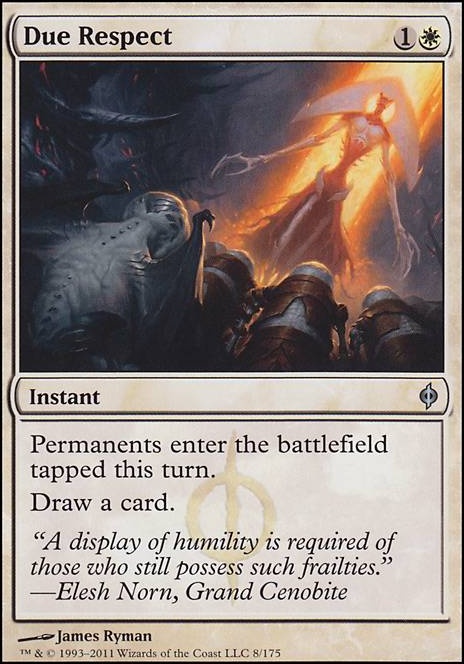 I recommend playing Noxious Revival instead of Apostle's Blessing

I'm no judge but I think blinking it resets it to Titi if its awoken horror. Also if you want protection Apostle's Blessing is great.

So, the only viable way to play Ramos, Dragon Engine at a high level in my opinion is with Sunforger.

Basically, you use tutors like Steelshaper's Gift, Mystical Tutor, or what ever else floats your boat (and maybe some cantrips like Opt) to try to get Sunforger.

Then, as a first order of business, you most likely want to equip Sunforger and use its ability to cast Eladamri's Call. You use it to grab Fervent Champion.

If someone tries to blow something of yours up before you can do that, instead go get Apostle's Blessing and then wait to try again (and hope they don't try blowing anything up again).

Basically, now your equip cost for Sunforger is 0, so you can grab stuff like Esper Charm to get the effects and use Ramos, Dragon Engine like crazy.

You can actually even go infinite. What you need is Ramos, Dragon Engine, Fervent Champion, Sunforger, and enough mana to start the combo.

Basically, you use Sunforger to get cards like Esper Charm to draw and put counters on Ramos, Dragon Engine. Then, you use Ramos's ability to get the mana. You use the mana and Sunforger to get a card such as Cloudshift and use it on Ramos.

Now, you can use his ability of removing the counters again this turn, because the game treats him as a new entity. You continue to make mana and draw cards this way until you are eventually able to draw Elixir of Immortality, shuffling everything back. Then you just do this again and again until you win. It requires some luck, but if you put a high number of draw spells and flicker/blink effects in your deck that can be used, you should be able to get it to work most of the time.

(Now, if you're looking at making the deck strong, I think this the best way to go. As far as making it fun, I have no idea.)

Apostle's Blessing LeaPlath leave me alone this is a fun deck not some super competitive deck.

I like the idea behind the deck, and Desert Nomads is a beautiful, classic old school card I love. I think you may need more removal/protection just to help cement your strategy though. Maybe some Apostle's Blessings or similar cards.

Oh, and Apostle's Blessing is a great card to counter removal.

Iâd vote for going mainly black with a splash of white. Youâll need protection/removal, and white excels in this respect. You could sideboard one stuff like Apostle's Blessing, Demystify, Smite or Divine Offering. Then thereâs lifegain, which will undoubtedly prove helpful, and white again has a plethora of cards to choose from.

Death's Shadow is definitely the deck you want to look into. It's generally not mono-black, but you could certainly stay in mono-black until you can build a higher budget. It'd look something like:

You could probably toss in Dark Confidant, Phyrexian Obliterator, and Gurmag Angler in place of a few non-creature spells. As your budget grows, add more colors. Red is really good for Monastery Swiftspear, Lightning Bolt, and Temur Battle Rage. More importantly, fetch + shock lands is the quickest way to grow Death's Shadow. Bloodstained Mire -> Blood Crypt -> Thoughtseize turn one followed by another fetch + shock gives you at least a 1/1 Death's Shadow on turn two. It could possibly be even bigger via Street Wraith and one of your Phyrexian mana spells. Sometimes you just have the nuts and kill them on turn three with Temur Battle Rage after stacking up on a bunch of Mutagenic Growths.