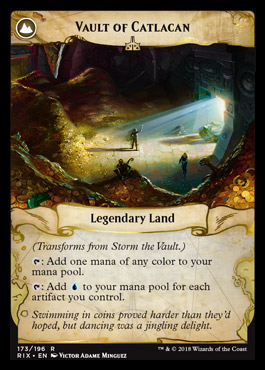 (Transforms from Storm the Vault.)

: Gain for every artifact you control.

Boza The Ixalan transformed lands all tap for color by themselves, but the Vault of Catlacan taps for purple (all mana) while the Itlimoc, Cradle of the Sun only taps for green.

I disagree about granting the land any kind of devotion benefit. The other two in the cycle only cares about the thing that makes them scale; Cradle = Creatures, Vault = Artifacts. This shouldn't be different.

As for the card itself it doesn't present itself in its base form as a way to get enchantments. The Cradle has an ETB that grabs a creature in the top 4. The Vault grants Treasures whenever your creatures connect on an opponent. This one... scries when you already cast enchantments.

I would suggest to change the base form to a way to gather enchantments.

At the beginning of your upkeep, you may return an enchantment card from your graveyard to your hand.

At the beginning of your end step, if you control 4 or more enchantments, transform ~.

At the beginning of your upkeep, look at the top card of your library. If it's an enchantment card, you may cast it.

At the beginning of your end step, if you control 4 or more enchantments, transform ~.

Here's the flipped form of Storm the Vault: Vault of Catlacan.

Corrosive_Cat,
Since we already have a return-to-hand effect in Decoction Module, I'm not sure about Paradoxical Outcome nor Endless Sands.

I think the deck already has enough wincons, but I could see dropping one (maybe the 'go big' option, if Dinos shift out of the meta) and focusing on the go-wide options, with 4x Reckless Fireweaver. In a deck like that, 1x Brass's Bounty could be really fun.

Athraithe,
Storm the Vault  Flip/Vault of Catlacan was in the very first build of the deck, and I talk about it in the 'Cards I've already tested' section.

Without manarocks and with all the tap effects taking TONS of mana, I'm not really sure what Paradox Engine would do here.

Corrosive_Cat and Snivy__,
Thanks so much!

Makeshift Munitions could be hilarious. I'm not sure if the deck has enough mana to really make worthwhile, but it's definitely worth a try.

Tilonalli's Summoner is intriguing, but I don't think it would be a great fit in the current deck. That's partly because the deck is more about chump-blocking (until it can build up enough Modules and mana to combo off) while Summoner is all about attacking. But mostly because the deck doesn't have nearly enough mana to make the Summoner totally useful. Maybe in a more Aggro version though, especially one with Storm the Vault  Flip → Vault of Catlacan ...

The Flip card on Storm the Vault  Flip is incorrect. It should be Vault of Catlacan. Thanks in advance for fixing!

I tried to post this on Izzet modules but it wasn't working so I'm just dropping it on your wall ...

I've been testing with this list; here are some thoughts:

Cragon18,
Thanks so much! I really appreciate your inputs; you've given me a TON of things to think on and test! Here are some initial thoughts: