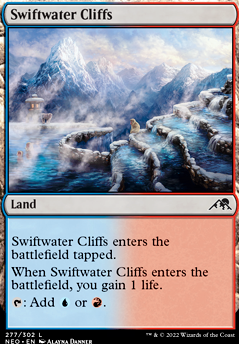 Something like Swiftwater Cliffs would be better than Izzet Guildgate if youâre going to stick with a tap land. Otherwise, something like Sulfur Falls isnât too pricey and is an upgrade to consider.

Unless I'm missing something Cleansing Wildfire and Geomancer's Gambit both seem like they don't advance the game plan very much given that they let your opponent search up basics to replace the lands they lose. Pauper tends to involve decks with lots of basics so it would be hard to get rid of so many that our opponents fail to find. That being said since you are running them you might want to consider Silverbluff Bridge over Swiftwater Cliffs because it will let you use either one of those spells to ramp yourself by targeting your own indestructable dual.

Hey Gattison, I agree that is how the universe works =).

Removing a Gryff would be problematic, because sometimes it's hard to draw eldrazi, having only 7 of them.

I'll think about removing a Goblin Instigator , or better a Dragon Fodder , and a Swiftwater Cliffs , but I'm unconfortable in having 16 lands, needs testing.

As for Goblin Chirurgeon , motion approved! I only need to acquire them.

Thanks for the advice! Cheers!

Hi SweatyGoku, Swiftwater Cliffs for mana fix?And Winged Words ,if you have in play pili-pala cost only 2 mana