Tortured Existence occurrence in decks from the last year

Dig em up buttercup
by alexbstamper

Atris, Oracle of Naps
by KaraZorEl 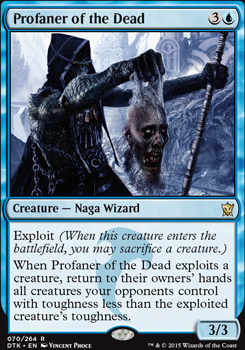 Thanks for the upvote Tata, but I don't think you looked over my deck before commenting :(

This is a budget deck, max of $200. I have to pick and choose which expensive price cards I play. I would like to play lots more expensive price cards, but that's not possible and all cards $5 or more you suggested are not better than any cards for their price already here. A wrath that kills all creatures with no restrictions is better than a wrath that has a restriction especially because reanimation is a theme here which can recover from a wrath. Look closer, Swords is here and has been since the beginning of time :)

You're right Ascetic, Darkblast and Imp are odd choices. There's a small dredge theme and it's here because I can't afford to add lots of expensive price tutors therefore I'm relying more on my graveyard interaction with Alesha. Imp, Darkblast, Thug, Stinkweed, Dakmor, Oddsmaker is the dredge package. Imp and Oddsmaker for no mana cost can put a dredge card into my graveyard.

Tortured Existence is a good suggestion and I will playtest it, but I don't like that I have to pay mana to discard a card. However, Existence can save an important creature putting it into my hand such as Karmic Guide or Kiki from exile of my graveyard by discarding another creature which I do like. Creatures who are enablers have more interactions in this deck then enchantments and Imp is a creature, Existence isn't.

Enlightened Ascetic is here because graveyard hate is annoying and most graveyard hate I see is from enchantments. Ascetic being a two drop who can be reanimated by Alesha or Lark, etc. or copied by Kiki gives me resiliency against enchantment graveyard hate especially Rest in Peace because Rest doesn't stop the ETB ability of Ascetic.

Hi harlw, Thank you for your comments!

For this card to be worth it, you actually need a setup. Ideally, you need Syr Konrad, the Grim on the field as well as one creature in the graveyard and one in your hand (must not be an eldrazi) AND also black mana. If you play the Tortured Existence let say on turn 4 and then the commander on turn 5, so you are only starting to have value from it on turn 6. Also note that your opponent will realise the combo and they will to destroy it before you do anything with it.

I think the best value for that card is to sneak it into the late game, when Syr Konrad, the Grim is already on the field and your opponents lost most of their life, then you play it and ping to kill the table.

I am not actually playing that card because I think its too slow and specific to be good but maybe I should consider it more. Let me think what you think of it. Cheer!

What is dead may never die

Tortured Existence and Altar of Dementia are other ways to trigger Syr Konrad multiple times per activation.