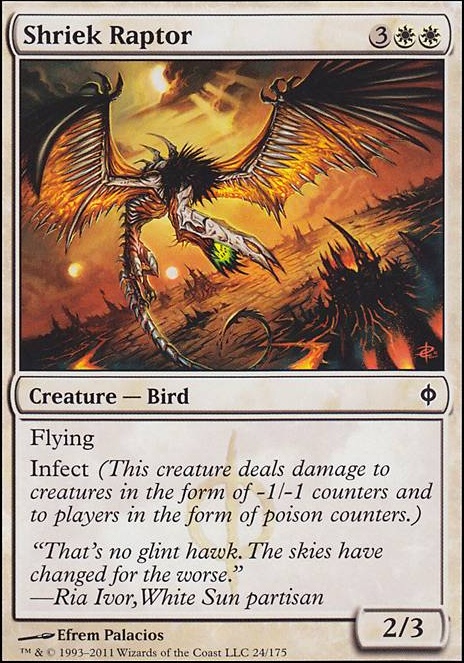 Atraxa Won't Stay Down.
by VitsEco

Mode of Affection: Infection
by dgalarza

I also removed Tine Shrike and Shriek Raptor. They are high costed for their damage, but they have flying. Not sure if I should keep them in or not.

You have an infection

Birds of a Feather

Hi there! First of all +1 for the obscure tribe.

So you mentioned that you are looking for ways beef up the power level of your deck and your focus is bird tokens. I am not sure what your budget considerations are, but here are some suggestions that I think that may help.

Metallic Mimic and Adaptive Automaton both are "birds" and provide a global buff to the rest of the tribe.

Ishai, Ojutai Dragonspeaker is a solid way to end the game once he becomes large enough (and he definitely will in a 4 player game).

Shriek Raptor is another way you can end the game through infect.

Riptide Replicator can create large bird tokens for you.

Some other more utility considerations could be:

I highly recommend running Herald's Horn in any tribal deck as it provides cost reduction and occasional card advantage.

Skullclamp is fantastic in any token deck as a source of card draw. Rhystic Study is also great in blue.

I'd recommend a little more interaction in your deck. Obviously Path to Exile, Swords to Plowshares, Cyclonic Rift and Return to Dust are very good in these colors, but a more tribal centric card is Harsh Mercy. It allows you to save your birds but still removes a majority of you opponent's creatures. Just watch out for other tribal decks.

I hope some of these suggestions help. Good luck deck building!

Steelshaper's Gift is definitely worth mentioning as it it the first half of Stoneforge Mystic for .

If you are going for the otk then you need to take out your useless infect creatures. "What to drop? 9 of your infect creatures. Blight Mamba, Blightwidow, Core Prowler, Corpse Cur, Necropede, Rot Wolf, Shriek Raptor, and Phyrexian Juggernaut."

For optimizing this build, you need to add the stoneforge package. Better put, the Stoneforge Mystic/Stonehewer Giant + Grafted Exoskeleton/sword of x & y/and Batterskull. Integrating these cards into your deck will increase consistency, speed, and resiliency. Yes I see that you already have the exoskeleton...