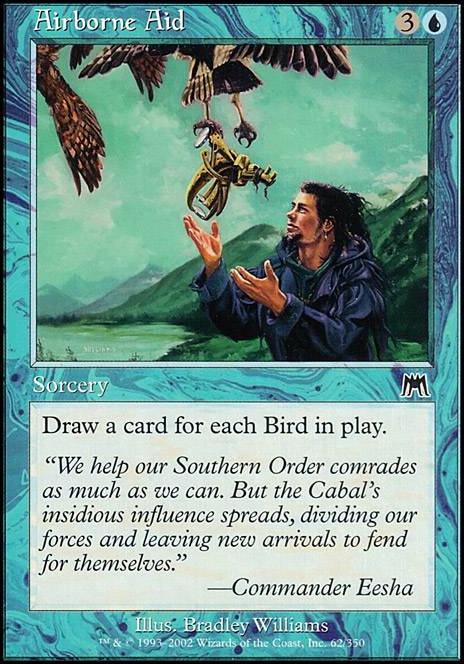 Draw a card for each Bird in play.

For The Birds!
by zachz

Airborne Aid cares about birds, everyone's birds/changelings even, as does Soraya the Falconer, but you've probably got enough coolness points off of OG Kangee. Unsettled Mariner would be a handy effect I expect. You could try Dovescape, it's very 'bird-centric', and you can have pretty beefy birds in the air compared to their 1/1s. Dovescape can also combo with some cards, I use it with Malevolent Hermit Â Flip Disturbed to get free Doves whenever I cast a relevant spell, while everyone else has everything countered, there are other combos that might be better in your metas, like infinite birds via Guile.

Sweet deck, lots of love for an old border Commander!

Aw Man! A Bird Crapped On My Windshield!

NinetyFish It's definitely something I've considered over Airborne Aid . The main reason it's not in there is because the deck was originally built around Airborne Aid, so I find it hard to cut. That, and Coastal Piracy is weirdly expensive, plus Enlightened Tutor is already functioning as a second Bident of Thassa . But yes, it's probably correct to just have an additional copy of the effect.

Bident of Thassa , Coastal Piracy and Airborne Aid are already included so yeah my usual strategy so far is "how about just a bit of damage so I can draw a card?". Not so sure about the eldrazi though since it lacks my birdy theme