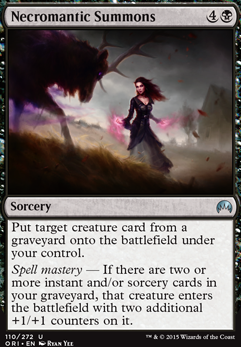 Put target creature card from a graveyard onto the battlefield under your control.

Spell mastery â If there are two or more instant and/or sorcery cards in your graveyard, that creature enters the battlefield with two additional +1/+1 counters on it. 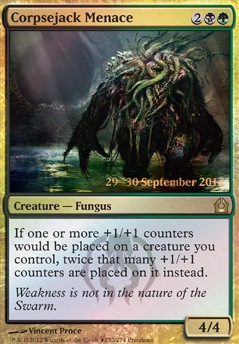 Volrath, who? I'm lazav or am I? Clone deck
by Hyo

Mostly, I'm confused about what you're planning on getting with your Transmute cards. The best targets for a Yuriko deck at the 5 mana slot are Conspiracy and Xenograft, which are both in the Maybeboard. Same for Arcane Adaptation at the 3-drop slot.

I see stuff that makes creatures unblockable, but auras seem pretty bad with ninjas. Cover of Darkness is what I would use in a tribal deck, or you can just put in more unblockable cheap stuff like Slither Blade , Triton Shorestalker , etc. If you want to Surveil, then Nightveil Sprite is well-suited to both purposes. I also see Thalakos Seer in the Maybeboard, which is obscene with Yuriko, so I would maindeck that ASAP.

You're packing a lot of different card types, so Emrakul, the Promised End would be good in this deck. It's high CMC to burn the table with Yuriko, but you should be able to consistently cast it for 8 or less.

As for cuts, Rise from the Grave is pretty bad. You can Extract from Darkness , Necromantic Summons or Liliana, Death's Majesty for the same cost. I don't like Mirko Vosk, Etrata, Mind Grind, or Traitor's Clutch, either. The a graveyard subtheme makes sense, but mill cards don't.

What's the point of Living Lore in this deck? You have no real spells to abuse. Any time you play UB with Living Lore, you should have a high mana cost revive to create a loop effect. Necromantic Summons for example. Throw in a Distortion Strike as followup and you're dealing 14 unblocked damage over two turns.

@Darksteel_Eye ow fun! I always love hearing about other tactics and ideas for this deck, I haven't been able to play it allot though since people who know me squeeze there buttcheeks together on the sight of this deckbox and with some other people with less money in there budget I play more on budget as well.

I'm slightly unsure about Necromantic Summons (have I made a typo somewhere?), but Necromantic Selection is in my maybe board as it works the same way as living dead does. They are one of the few exceptions that let me keep a boardstate with all counters I had even though Reyhan leaves play before new creatures are on the battlefield since this cards effect needs to finish before Reyhan can check her ability.

However i haven't run either necromantic cards yet, it's just an idea.

Furthermore I play some sacrifice for multiple reasons.

By the sounds of it, you want some pure reanimation to get the most out of your commander. Victimize, Rise from the Grave, Necromantic Summons, and Debtors' Knell would help fit the bill.