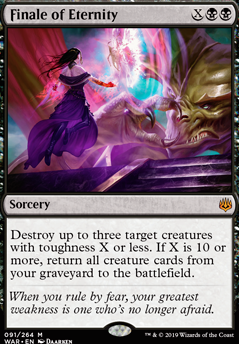 Destroy up to three target creatures with toughness X or less. If X is 10 or more, return all creature cards from your graveyard to the battlefield.

Finale of Eternity occurrence in decks from the last year

that's so many eyes dude
by pretendingtoalright 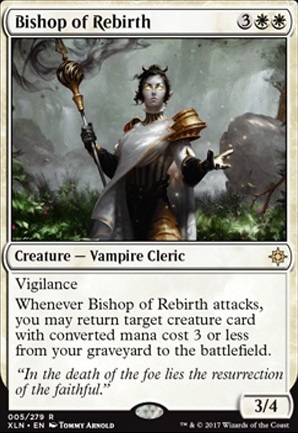 I know you're looking for cuts currently, but one include that compliments your commander extremely well would be Krark's Thumb.

Also your forum post said you want to get things back with reanimator effects, but you don't include Animate Dead or Necromancy. Whip of Erebos and Victimize could also be useful to you. Following off of your forum post, if filling your graveyard is your goal, Mesmeric Orb is a fantastic card for such strategies.

Yeah, recursion is a challenge in this deck due to the cost creatures. Profane Command & Volrath's Stronghold certainly help, but I'm wondering if a good 'ol Eternal Witness warrants a home in here (like she does in any green deck really). Mudbutt, I am drawn to the removal option of Finale of Eternity and am definitely considering.

Xephon_ Ah yea I guess that would not be too helpful then as there is only 7 cards that could come back into play. Should resurrection be needed I think Finale of Eternity would work a little better as it can also be used to destroy three creatures. Your point is very valid.

Friend, what do you think of changing Soul of Innistrad for Ink-Eyes, Servant of Oni, Finale of Eternity for Thrilling Encore, and Profane Command for Akroma's Memorial/Eldrazi Monument? I'm very interested in making a rat tribal Commander and I think i'm going for this recipe of yours, with the alterations i'm mentioning.