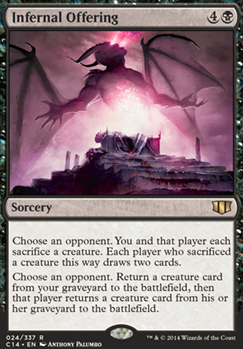 Choose an opponent. You and that player each sacrifice a creature. Each player who sacrificed a creature this way draws two cards. 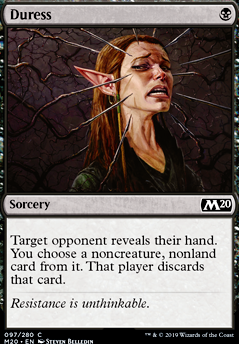 I think I would recommend more mana rocks, swapping them for Varchild, Betrayer of Kjeldor , Varchild's War-Riders and maybe Seal of Cleansing . I love the two Varchild cards, but in my experience they don't usually work that well within the 99, sadly they don't usually do enough, specially if you draw the War-Riders and not Varchild. On the other hand, the Seal is a pretty good card and taking it out would be more of a meta call, but if your meta has a lot of artifact or enchantment decks is totally fine to play. Otherwise I would recommend leaving Aura of Silence and a tutor instead. Or Blind Obedience , that card's nuts!

Also some of the Tempt cycle could be pretty cool, like Tempt with Vengeance . Maybe Infernal Offering fits in this deck as well.

Finally, althoug a bit pricy the combo between Urborg, Tomb of Yawgmoth and Cabal Coffers would be perfect for this deck.

Ok, I found a Cruel Celebrant in my box, gonna use this as an additional Zulaport Cutthroat . Probably gonna cut Phyrexian Vault for him, might cut Infernal Offering for a Vindicate . I do rather like Batterskull in the deck.

See, that's where things get tricky. It'll all come down to play testing and seeing what doesnt perform as well as you like and this is usually meta specific. Cards I'd probably cut are Phyrexian Vault , Infernal Offering , and Batterskull

griffstick on Looking for cards to fit ...

The offering cycle that cmdr 14 gave us, Volcanic Offering , and Infernal Offering .

There the chain cards. Like Chain of Smog and Chain Lightning