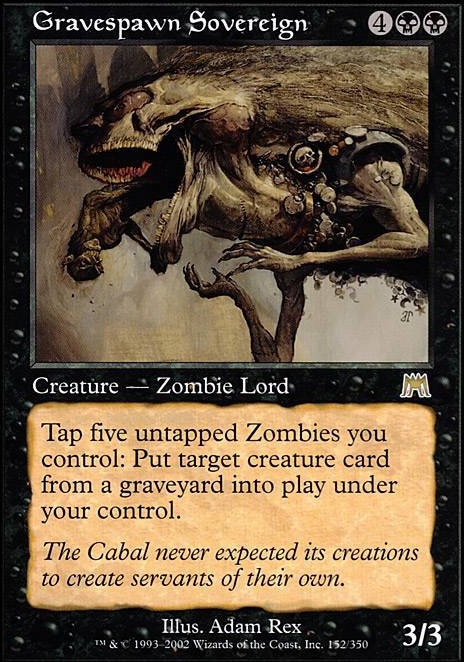 Tap five untapped Zombies you control: Put target creature card from a graveyard onto the battlefield under your control.

Gravespawn Sovereign occurrence in decks from the last year

Gotta Sac 'em all!
by Sialeeds

Dunno what to name this

Ah, a fellow Sidisi player! Your deck looks pretty solid. Since I assume you want to stay at the same power level and budget as your decklist, here are some suggestions:

Underrealm Lich: An amazing card, both for the card selection and graveyard filling. He's also hard to get rid of, and ensures you don't mill yourself out of the game. He does unfortunately nonbo with Lab Maniac, though.

Thanks so much! These suggestions are great. Here's my thoughts:

Living Death: I've tested it, and from what I've found, if I'm at the point where I want to cast Living Death, I'm already pretty far ahead.

Basalt Monolith: I forgot all about the combos with Mesmeric Orb! I'll test it out today.

Vigor: I didn't know about this card at all! This will create infinite zombies and my combos stay intact! Thanks.

Gravespawn Sovereign: This card needs to be tested, like, yesterday. How haven't I heard of this card?

Stinkweed Imp: I've tested most of the dredgers, and they always felt really lackluster to me. If I put in the whole package, it would probably become a lot better, but I don't want to overhaul half of my deck.

Kederekt Leviathan: Once I start to pick up the more pricy instant-speed reanimation, I'll probably put this in as a gotcha! card, but for now, I'll stick to my guns.

Phyrexian Delver: Well, that seems like a no-brainer. How am I not running this?

Thanks so much for these suggestions!

Hi there, this is Voidia/Lime_Blue, the Author of SBT Combo.

This list has a great start to a mid-tier SBT deck and reasonably close to what I might play if I wanted to power-down my own cEDH deck, so you have a great foundation to work with. I'll try to keep my recommendations fairly budget and more in the realm of niche tech, because obviously duals will help the deck, but we already know that.

Living Death: This card is an absolute powerhouse because of the self mill the deck is already trying to do.

Basalt Monolith: Combo's with Mesmeric Orb and doesn't require haste on a creature.

Vigor: Any self-shuffler will do, but the turtle buffalo is my favorite. With a mesmeric orb combo, this will create infinite zombies and won't reset your progress like an eldrazi titan.

Gravespawn Sovereign: A more unconventional zombie lord, he can snowball extra tokens into larger bodies, also reanimates everything when you set up the previously mentioned infinite outlet.

Stinkweed Imp: Stand in for all the high dredge options, Dredge is super powerful in this deck for filling the yard with reanimate targets and getting a statistically guaranteed zombie.

Void Winnower: One of the most powerful early reanimation targets that puts up a quick clock while heavily restricting your opponents.

Kederekt Leviathan: Tech reanimate choice if you need to reset the board of problematic permanents. Works very well with the enchantment reanimates like Necromancy because you get the enchantment back to use on something that will stick around.

Phyrexian Delver: All I need to say is Vilis.

Hopefully these give you some ideas about how to kick it up a notch with this deck. Happy Milling!

This is so cool! I love how on-theme this is, you did such a good job!!! Black isn't really my color, so a lot of these cards I've never seen before. The artwork is amazing, that Gravespawn Sovereign is pure nightmare fuel. :)