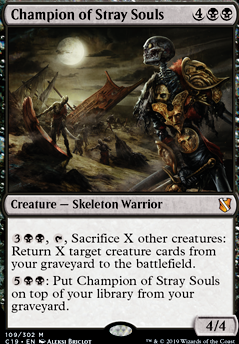 , , Sacrifice X other creatures: Return X target creatures from your graveyard to the battlefield.

: Put Champion of Stray Souls on top of your library from your graveyard.

Champion of Stray Souls occurrence in decks from the last year 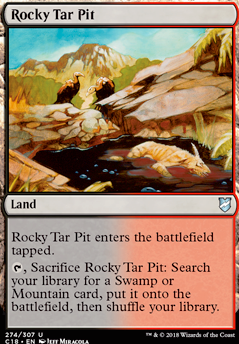 The True Skeleton Was Inside You All Along

I love that deck name. This is pure perfection. There isn't much I could improve regarding the deck. But what about a 1-of Champion of Stray Souls? It's ability is absolutely insane with gravepact, but I know both itself and the ability are pretty expensive.

Let Me Whip You Into Shape

Spirit of Xmas Past

Grave Betrayal -> Mortal Combat : Better alternate wincon since I'm not running a ton of removal and combos well with Syr Konrad and the large amount of creatures I'm running.

Noosegraf Mob -> Syr Konrad, the Grim : This decision was between Noosegraf Mob and Marionette Master. Noosegraf seemed the better choice to cut since Marionette makes 3 tokens on ETB as opposed to waiting for players to cast spells. Syr Konrad is a good alternate commander for this deck and pairs well with the theme to dish out some damage.

Champion of Stray Souls -> Living Death : Tough decision since this feels like a good home for Champion of Stray Souls, but it costs so much to get out and use it's ability. I'll still try to get him in the deck, but unless I cheat him out with Hell's Caretaker or something similar his cost is hard to justify. Living Death is an all-star recursion piece and works well with Grave Pact-like abilities.