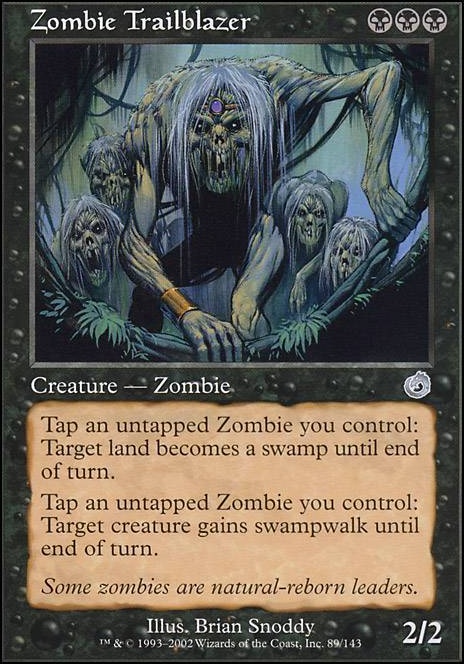 Tap an untapped Zombie you control: Target land becomes a Swamp until end of turn.

Ayara, First of Locthwain, Queen of the Undead
by Ashenia

I've been jamming Varina for a few months and she has been fantastic. Check out my list below if you're interested.

Zombie Apocalypse and Living Death are fantastic and end games with a Grey Merchant of Asphodel often. I also prefer Victimize over Stitch Together since you should always have sacrifice fodder.

You could add a Nim Deathmantle as you already have every other card needed for that combo.

Some cards that don't seem good enough to make the cut or are too high cost I would say are Dark Salvation , Debt to the Deathless , Desecrated Tomb , Necromancer's Covenant , Zombie Trailblazer , Mikaeus, the Unhallowed (unless I'm missing a combo?), Binding Mummy and I think you could go down to 35 lands and be okay.

Other than that, maybe just add some of the staple card draw and you've got yourself a fun list.

Hey, my concern with your deck is the manabase. If you don't have or can't afford the playable Dimir dual lands then you would be better off playing only black with Swamps. Right now the manabase is really bad with only two playable Dimir dual lands. You don't want Islands because these conflict too much with the majority of the black cards here especially one drop black Zombies.

Consider Sidisi, Undead Vizier as the Commander? Sidisi is good as a Commander as a repeatable tutor and Zombies give you plenty of sac fodder. Mono black can take advantage of Crypt Ghast , Extraplanar Lens (best with Snow-Covered Swamp ), Liliana of the Dark Realms , Cabal Coffers , Cabal Stronghold as repeatable ramp with Swamps. Dark Ritual , Cabal Ritual , Bubbling Muck , Songs of the Damned are more cards that can make ramp.

Mono black can also use reanimation which is good with Sidisi and Zombies: Animate Dead , Reanimate , Victimize , Buried Alive , Entomb , Patriarch's Bidding , Living Death , Liliana, Death's Majesty , Sheoldred. With mono black you can use Urborg, Tomb of Yawgmoth and Zombie Trailblazer with Filth as ways to make your Zombies unblockable. Good luck with your deck.

A couple of other things that I am considering are Zombie Trailblazer and Rogue's Passage to make Yahenni unblockable and Balthor the Defiled for mass recursion. Having a hard time determining cuts at this point though. This deck has been a longtime work in progress and has evolved a lot over that time.

This deck is sick. I am totally going to use this one as a reference point. Also im just going to show some love for Zombie Trailblazer not really a suggestion I just like telling people this card exists

I'd recommend Corpse Harvester for additional swamp and to pull more key zoms out of your deck, and Zombie Trailblazer for more evasion if you want it (provided you have zombies on hand.)

Don't fight the self mill and discard, embrace it and use things like Balthor the Defiled, Zombie Apocalypse and Living Death. In short consider things that mass reanimate and cards with madness such as From Under the Floorboards or Frantic Purification, flashback like Unburial Rites or Army of the Damned also delve with things like Dig Through Time, Temporal Trespass and Treasure Cruise.

Other creatures that transform your graveyard into an extended hand are things like Phyrexian Delver, Chainer, Dementia Master, Havengul Lich, Coffin Queen and Dralnu, Lich Lord, although care must be taken when utilizing him. I CANNOT state enough how useful Havengul Lich is, he IS obscene with Rooftop Storm... and Sidisi, Undead Vizier. While it does not play things from your graveyard Wonder can be nasty, so many flying zombies.

If you meta has any similarities to mine then you may have issues keeping Rooftop Storm, besides counter magic the best way I have found to get around enchantment hate and it getting milled is Crystal Chimes and Academy Ruins. On that note this commander is also a prime candidate for Crucible of Worlds.

I don't know if you knew this trick or not but Zombie Trailblazer does not ADD swamp to the land type but rather makes the land a swamp and ONLY a swamp so if you have enough tokens and your opponent is not black you can easily lock them out of their colors.