Jokes aside, please read -- The coronavirus has the potential to be a disaster if we don't take precautions.

It's best to stay home and play Magic online... But if you insist on playing at your LGS:

The more you help reduce the spread (in the Magic community and elsewhere), the more you'll help prevent the burden on our healthcare system, as well as reducing transmission to vulnerable people.

This is something that we all need to pay attention to, whether or not we are personally at risk.

The biggest threat isn't the disease's fatality rate, per se, it's the danger of there being simply too few resources to treat everyone (and thus, leading to unnecessary deaths from lack of treatment).

The only plagues we should be spreading are the fictional ones in-game ( Plaguecrafter says "hi!"). Why go out and catch COVID-19, when you could instead stay home and be infected by Phyrexia? :3 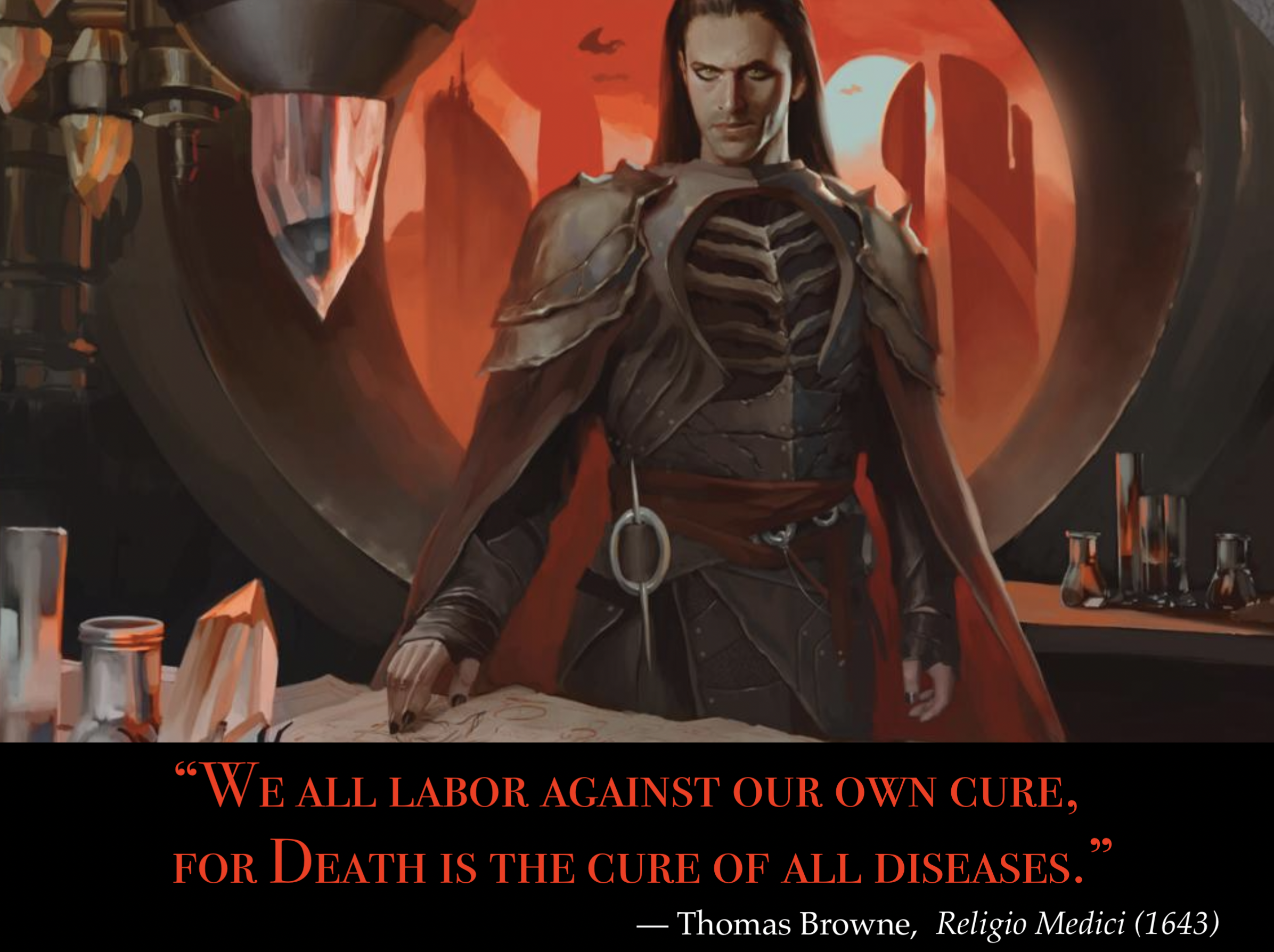 Behold Yawgmoth, the Father of Machines, the Lord of the Wastes: 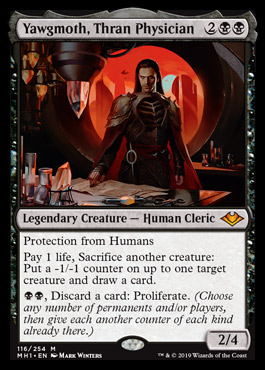 This is a hybrid mono-black control-combo deck, with minor flavor elements. It is meant for high-power (but not cEDH) pods, particularly creature-based or commander-reliant ones. The deck intends to:

This deck can and will repeatedly kill mana dorks, utility creatures, commanders... as well as win via prison locks, infinite combos, and (rarely) infect.

The deck intends to end the game via any of the following infinite (or pseudo-infinite) interactions:

Combos that function as Yawgmoth's Bargain :

(These combos work because you can use Yawgmoth to place -1 counters to neutralize the +1 counters on undying creatures. Note that with Deathgreeter , Blood Artist , or Zulaport Cutthroat , these combos allow you to draw infinitely without losing life. Mikaeus, the Unhallowed can also allow any non-human creatures to replace the undying creatures in these combos, which means that you frequently win immediately upon getting Mikaeus into play.)

Combos without Yawgmoth himself:

(These create infinite death triggers and ETBs, which trigger Genesis Chamber / Zulaport Cutthroat / Blood Artist . Note that with Yawgmoth on the battlefield, several variants of these combos also allow you to draw indefinitely at the cost of life, similarly to the combos above.)

(These alternate wincons are slow and grindy, and work best if you've established a lock on the field, as discussed in the next section.)

Fittingly enough, with many of these setups, our commander's effect becomes Yawgmoth's Bargain (which is banned in EDH for a reason) until we find a Blood Artist effect, which lets us go properly "infinite". The deck plays as many mana-positive effects as the budget permits, to let the deck pseudo-storm off once you're in the process of drawing your deck.

Notably, the deck is fully capable of winning via Infect (thematically appropriate, no?) or Planeswalker emblems -- ie, without infinite combos. This is our backup wincon when stax pieces such as Rest in Peace are on the field, which disrupt our proper infinite combos. More details in the next section!

The real power of this deck, however, lies in the toolbox-esque ability to use Yawgmoth's abilities at instant-speed. You'll rarely want to use them on your turn, instead waiting to get maximal value from each activation (ie, getting maximum resources from each of Dr. Yawgmoth's "patients").

These stax-ish elements let us win with more grindy wincons, such as proliferating up to planeswalker ultimates, token aggro, or proliferation of poison counters (granted via Inkmoth Nexus , and incredibly in-flavor for the Lord of Phyrexia). Or, you know, we can wait for our opponents' to concede out of misery! ;)

HOW NOT TO DIE TO YOUR OWN ABILITY

The deck also runs minor life-gain elements, particularly Gray Merchant of Asphodel , which can let you dig much deeper into your deck with Yawgmoth's ability (as well as, you know, not die). I've actually won by repeatedly draining opponents with Gary, so that's at least possible (though not easy). I've been working to find space for Whip of Erebos for recovering my life total, as well.

However, the question remains - if we don't have access to Zulaport Cutthroat , how do we actually WIN with our full library in our hand? We can't play Laboratory Maniac (though I'm dangerously tempted to run Praetor's Grasp to steal one), so we have to win through other means.

Even if I have no mana untapped when executing the combo, I usually use mana rocks to recoup mana where possible: Mana Crypt / Chrome Mox into Mana Vault / Fellwar Stone / Cabal Ritual / Culling the Weak / Dark Ritual etc, to rebuild my available resources. I've considered running Lotus Petal for this purpose as well.

With mana and my library in hand, the simplest way to end the game is casting any non-draw infinite combo (such as Phyrexian Altar + Gravecrawler ) with Defense Grid or Imp's Mischief as protection against disruption, winning via infinite instances of any death trigger (or ETB ability). In a real pinch (for example, if Phyrexian Altar were exiled), I have used Pitiless Plunderer to generate pseudo-infinite black mana and cast (and ult) Liliana, Dreadhorde General .

OTHER SYNERGIES, NOTES, AND FUTURE DEVELOPMENTS

This deck focuses a bit more heavily on Yawgmoth's token-sacrificing ability, but it's worth mentioning that Yawgmoth can rapidly proliferate counters on cards such as Blast Zone , Hangarback Walker , Phyrexian Scriptures , Everflowing Chalice , or any of our planeswalkers (in addition to poison counters, obviously). This deck can sometimes act like a secret superfriends list, with staxier hands, since either Liliana's ultimate will win the game!

The deck runs a strong reanimation suite as well, since Yawgmoth's proliferate effect gives us an efficient discard outlet to put powerful threats in the grave. Reanimation is also an easier way to put Mikaeus, the Unhallowed onto the battlefield, which enables several of our infinite combos. Notably, we can cast Final Parting to put a threat or combo piece into the graveyard, as well as Reanimate or Animate Dead in hand.

Awaken the Erstwhile is something of a pet card in this deck, but it does good work by allowing us to strip opponents' hands while refilling our own. If you sacrifice tokens to put a -1 counter on each of your opponents' zombies, then proliferate once, you can be the only player with a hand OR creatures. Awaken the Erstwhile works nicely with reanimation spells as well, to reanimate any large threats you discarded.

The landbase is largely basics, obviously, but we include the classic Cabal Coffers / Urborg, Tomb of Yawgmoth pairing. I no longer run Lake of the Dead , as it's too easy to get 2-for-1'd with the card.

Remember that we can proliferate lore counters on Phyrexian Scriptures to blow up the board at instant speed (and keep Yawgmoth around, no less). Most people don't realize that this interaction works! ;) Overall, this deck can proliferate six kinds of counters, all with different interactions:

(Make sure to take some complimentary Glistening Oil with you when you leave!)

Give an upvote, if you yearn for the day when all is one, as the Machine Gospel has foretold!