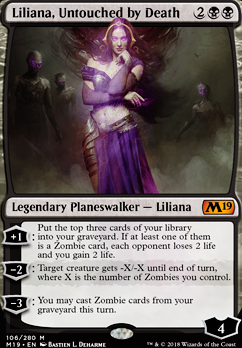 +1: Put the top three cards of your library into your graveyard. If at least one of them is a Zombie card, each opponent loses 2 life and you gain 2 life.

-2: Target creature gets -X/-X until end of turn, where X is the number of Zombies you control.

-3: You may cast Zombie cards from your graveyard this turn.

Liliana, Untouched By Death occurrence in decks from the last year

Liliana, Master of Death
by squirrelsammich 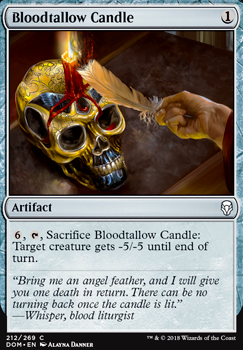 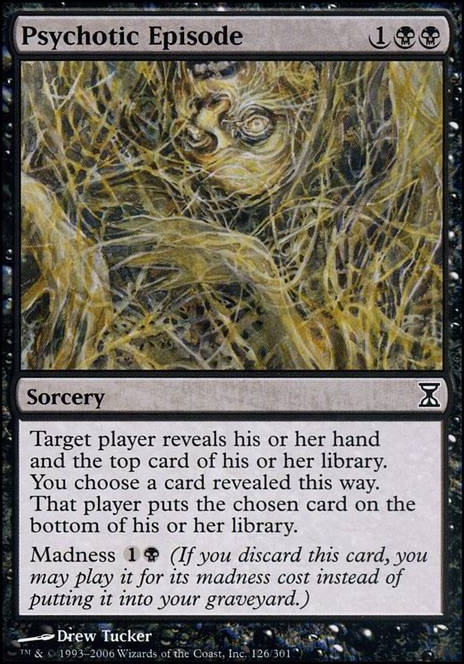 Some Good Ol' Necromancy
by johnpants

ThePerilousRealm, Thanks for the up-vote and recommendation! Glad you liked the list! I actually had both in this deck at one point, but removed them for similar reasons. Plansewalkers don't tend to stick around in my meta, especially with 3 other people and their removal. So they were just too slow. The way I treat Plansewalkers at this point is that if their immediate activation does not provide a good advantage for their cost, then they were out since I was only able to mostly activate them once.

I thought about taking out Liliana, Untouched By Death, but her -3 ability can provide immediate combos especially with Rooftop Storm on the field. Just last night I pulled an infinite tutor search with Rooftop, Liliana, and Sidisi, Undead Vizier which was fun. There are other great combos with that -3 ability.

Let me know when you have yours built! I would love to see what you have come up with!

Cytex, thanks for the suggestions! I think at for Open the Graves , I'll stay at the exact same mana cost for Liliana's Mastery . Getting the +1/+1 anthem effect has proven to be exceptional, and what are effectively 2x 3/3 zombie tokens for 5 mana is pretty good. Graf Harvest is okay, but I can get the same effect from Lord of the Accursed . Sure, it's a bit more expensive, but I get multiple functions from the single card (anthem effect and the menace bit), and I don't have to remove any of the current cards to try to find room for Graf Harvest . Many of the Liliana planeswalkers would work well in the deck. I think Liliana, the Last Hope is often used, and I know many recent builds have Liliana, Untouched By Death . I think Liliana, Untouched By Death might be okay as 2x in the sideboard, but I prefer to just slam some creatures.