Whenever you cast a creature spell, put X 1/1 black Thrull creature tokens onto the battlefield, where X is that spell's converted mana cost. 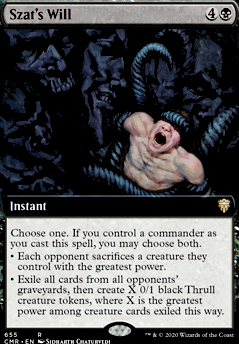 Eloise and the Mystery of the Machines
by PrettzyDizzy

FormOverFunction on Are there any Commanders you'd â¦

Nin, the Pain Artist and Endrek Sahr, Master Breeder would probably make my Torture! deck perfectly flavored. The mechanics would work okay together... but the FLAVOR chefs_kiss.gif Circu, Dimir Lobotomist is a close second... but I really dig Endrekâs mechanic.

Have you considered Parallel Lives or Second Harvest to ramp up your squirrel production? It stacks with your commander's effect. I'm also a fan of Arasta of the Endless Web and Blight Mound and Endrek Sahr, Master Breeder as token producers which allow you to make squirrels too. Have you considered Yawgmoth, Thran Physician as a sac outlet for all of your ridiculous tokens? He's spectacular in that role...

This was hard, extremely so: this was very nearly sixteen commanders. Black is well-suited to stand alone, and there are so, so many good choices that Iâve developed a newfound respect for anyone who tries to top ten black. This is almost my favorite color, and while it may be limited in dealing with anything not a creature, graveyard, or a card in hand, good GOD can it deal. All the tutors, all the kill spells, creatures of the night, what musicâ¦ Sorry, itâs easy to go full Dracula in this area of the pie. In summary, Iâve a lot more to say on this subject than the colors weâve already covered. However, as always in this project, the point is to celebrate three thematic elements, not drool over all the ludicrous power in this necrotic slice of the pie. Today weâre limiting ourselves to three pervading archetypes: life, death, and graveyard manipulation.

White is a respectable powerhouse in this arena, but black takes center stage with undeniably better style. Whereas white just gains it, playing black means treating your life total as just one more resource to use, abuse, and exploit. Vampirism, folks, and not the glittery sort either. Cruel, properly thirsty vampirism, all about chugging opponents like cheap beer. And if you enjoy masochistic chicaneries that trade life for cards, removal, mana, and eventually victory, look no further.

This guy. This glorious, ludicrous guy. General damage? Check. Lifelink? Check. Game-warping mechanic? Great big olâ hissing, honking, ball-biting check. A peak, high performance example of boom/bust gameplay. Just be sure to draw as many cards as you can and pray that you find quality lifegain to patch the holes youâll be blowing in yourself.

Hereâs the thing: in mono-black, whenever you gain life itâs at someone elseâs expense. An effect that doubles said expense? Please and thank you. board wide Lifelink? Also yes. Throw down some grunts, swipe right, and watch your peanut gallery of jerks like the Blood Artist heckle opponents to death.

You know whatâs a great defense, command damage notwithstanding? A huge life total. This is partly why red struggles in EDH: hard to beat down someone with piles of life and a few choice defensive options. In some ways itâs just as hard to vampire them to death. You know who doesnât care? Erebos. Old Erebos is singularly unimpressed by new Heliodâs jank, and happy to sweeten the deal with reliable draw for a modest fee of mana and life.

The past few years have seen respectable creature removal cropping up even in blue and green. White has oodles of fantastic board wipes, and red can hose everything down with direct damage. But compared to black, theyâre all posers. Shrinking creatures, sacrifice and discard are all primarily black stables. Toxic Deluge laughs at your indestructible legions. Grave Pact is amused by your shroud, and will bury you in it. This is the color of Go for the Throat , Diabolic Edict , and Tragic Slip . When black comes for your minions, you better have a mountain of solutions, otherwise the only way to save said minions is to take them off the field yourself.

Spoiler alert: three of the Kamigawa ascendants are going to feature in these articles, and Kuon is the meanest (since the blue one got banned, anyway). I speak from gleefully shameless experience here. For the low, low price of three creatures and a modest downpayment of another every turn, black sacrifice stax can be yours. Add fun things like Magus of the Abyss , Dread Return , and Fleshbag Marauder and all his rude, rude cousins. Trust me on this: Kuon is, if youâll pardon the pun, enchantingly nasty.

Very few things like boardwipes. However, provided theyâve had a snack first, Yahenni likes them just fine. An affordable commander with a sac outlet (indestructibility on a stick :D) who actively rewards slaughtering anything that could block? Sold! Throw in Fallen Ideal . You wonât be sorry.

In my last article I referred to blue as the heavyweight champion of yoink, but thatâs not to say there arenât other colors in the ring. Forcing opponents to sacrifice creatures and discard cards are both black staples, and boy howdy does Tergrid reward such misbehavior (though the adorable Tinybones, Trinket Thief may be more a discard fiend's speed). If tokens arenât in the local meta, this will change that.

Green shares a bit of this glory: thereâs a pervasive theme in green of both exiling and returning cards to the hand from there. BUTâ¦ Black is still the unequivocal graveyard color, leaving the charge in both filling and emptying it, especially of creatures and onto the field. Bojuka Bog . Animate Dead . Living Death . Green may have some good tricks here, but few so dirty as an Entomb followed by Reanimate . So, so dirty. I saw it only once, but it was a turn two Terastodon . Once was enough.

Reanimator decks got you down? Hereâs a bone, friends. Stealing your opponentâs guys is one thing. Exiling said guys when their owners wipe your stolen board is another. Chainer doesnât like choices. Chainer likes it all. And Chainer, above all else, loves to break your opponentâs heads with their own toys.

Convinced I like Kamigawa yet? I used to play this janky beast in a standard spirit deck. These days, my thoughts run first to a big pile of Shadowborn Apostle and assorted demons, but thatâs just the easy first on the list of tricksy things up Shireiâs sleeve. Again, Blood Artist and friends. Again, deeply unhappy opponents.

Hereâs horror for you. Anyone who doesnât admit to a healthy bout of nervousness when this guy hits the field is a liar (or playing Orbs of Warding . Coming or going, yours or theirs, killed or milled or discarded, if the graveyard is involved then the good syr gets his ping. Have yourself a time with any number of silly combos and tactics: your opponents are guaranteed a Tortured Existence .

I ran Marrow-Gnawer for a time, but offloaded it when I realized that I was bored by the deck. A few years later I built Kuon, who quickly became infamous in my playgroup. However, aspects of the deck that I particularly enjoyed were better served when I switched to this villainous wench. With a decent draw effect (especially with Thornbite Staff ) and an imminently breakable ping engine, Ayara is BRUTAL with proper support. Endrek Sahr, Master Breeder . Army of the Damned . And the game-winning monstrosity itself, Plague of Vermin . Revel in countless bodies to exploit as only black can and watch your opponents die of Ayaraâs approval.

That's it for this round. Thoughts and questions are welcome. I hope you enjoyed it, and will come back next week for Red!