Search your library for a card and put that card into your graveyard, then shuffle your library. 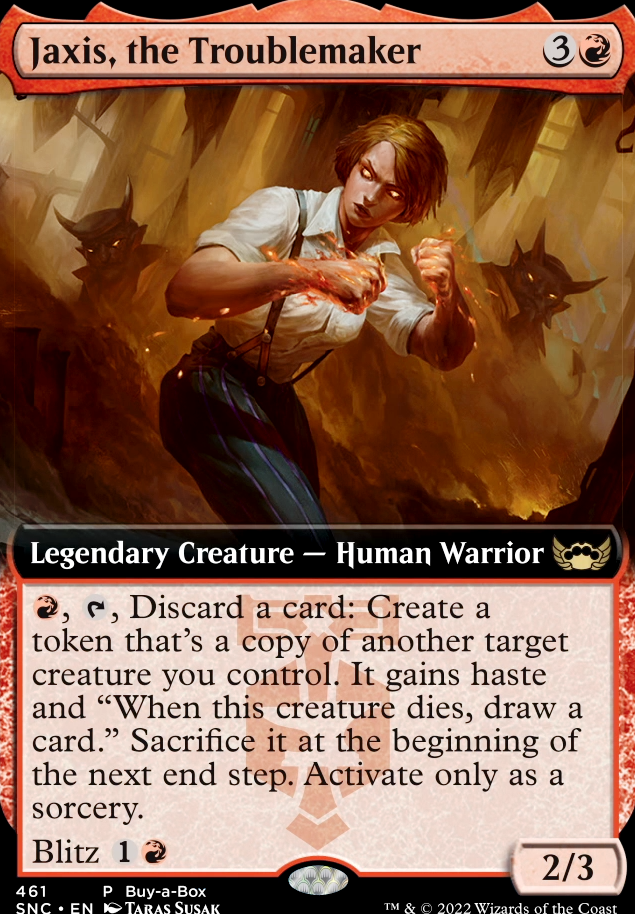 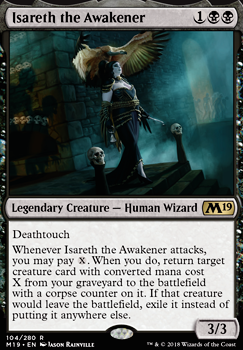 Hatred can be another nice win con for Commander damage.

Profane Command is really flexible, and with Xiahou Dun, the One-Eyed you can drain life an opponent every turn (use him to recur the command, use the command to reanimate him and drain life).

Unmarked Grave, while not at strong as Entomb, can still fetch up Filth or other reanimation

Good idea! I'll buy a copy of Entomb someday. A lot of the seemingly valuable cards in this build serve multiple purposes for my EDH and modern decks. Entomb is just a little outside of my comfort zone on spending, but I'll pick it up if there's a price drop. Thanks for commenting!

Buried Alive might not be as effective as you might expect because the only creatures I want in the yard are Kroxa, Titan of Death's Hunger and Ox of Agonas

Surely a graveyard-based spellslinger deck should run Entomb? Maybe even Buried Alive? Casting them twice in a deck like this would be so much value :D

Hey, Professor's version is interesting, but in my opinion rushed and doesn't have many cards that can setup Runo to transform which is odd since in his deck tech that's number one goal... Sakashima of a Thousand Faces is an excellent upgrade. Sakashima as well as Spark Double are not even mentioned in his deck tech and they're some of the more unique and fun effects to play with Krothuss.

There's only 6 cards to setup Runo which means consistently unless you draw Top, Remora or Study early game for draw, every game, it will be difficult to transform Runo. Using Entomb effects to help to setup Runo just to get a sea monster into your graveyard doesn't seem very good. There needs to be other uses for Entomb effects; Buried Alive at least gets you more than one creature such as Wonder. There's no reanimation here thus Entomb effects after Krothuss are only being used to get Wonder. The first changes to consider are to add more setup for Runo. Ramp is important, but I think you can afford to cut a few of the lesser rocks such as the Diamonds and Commander's Sphere.

The lack of reanimation options in Professor's version when playing black I disagree with because realistically the only way you're going to get good sea monsters onto the battlefield are more ways to cheat their mana costs. Quicksilver Amulet and Quest for Ula's Temple are good, although Quest is slow/unreliable, but you really need more. The second changes to consider are adding some reanimation replacing some of the lesser high CMC nonsea monster cards such as Octopus Umbra.

The Professor mentioned Hullbreaker Horror in his deck tech, but didn't expand on how powerful it is with Krothuss. It's most likely the best sea monster with Krothuss since when copied it can combo with mana rocks to continually bounce all your opponent's nonland permanents. When you control two or more Hullbreakers then any 0 CMC artifact with Sol Ring is infinite cast/colorless mana/nonland bounce.

Mox Amber when you control Runo/Krothuss is infinite blue/black mana with Sol. Any 2 CMC artifact that can ETB untapped to make mana + Sol can be infinite casts/bounce of all nonland permanents. By adding Everflowing Chalice and/or Amber then the Hullbreaker combo can make other sorcery speed effects that bounce less needed such as Consuming Tide and Inundate. Sol Talisman doesn't work with Hullbreaker because of suspend thus it could be cut for Chalice or Amber.

Because you have Thassa, God of the Sea then Wormhole Serpent isn't needed even though it's a Serpent it's not one you want to copy with Krothuss since it doesn't do much for five mana including not helping Runo to transform. In my opinion if you're going to play creatures who won't help Runo to transform then those creatures better give you something else that's worth playing/copying them with Krothuss. Striped Riverwinder and River Serpent are examples of lesser sea monsters who are actually really good for Runo because of their quick one mana cycling. Copying them with Korthuss isn't much better than copying Wormhole, but the difference is they can help Runo to transform and you can get two draws.