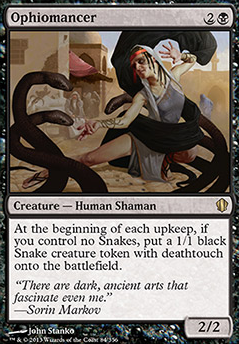 At the beginning of each upkeep, if you control no Snakes, put a 1/1 black Snake creature token with deathtouch onto the battlefield.

Nice Tokens You Got There...
by sevro_b

Taxation is Theft! (And I am the King of Thieves)
by DriftingEpyon

She will reign!
by jball30

Ophiomancer instead of Field of Souls?

Hi_diddly_ho_neighbor I mean, while yes, Ophiomancer has existed for a while, I don't think it is a bad card by any stretch, and assuming that white got a worse version of it, that happens to be able to make more tokens, but also is more finicky as to when, that also let's you have as much lands as any other player, like Land Tax, but can get you more than one land per turn?

I think any white deck needs to ask themself if they can afford to not run this card in their deck. Control lists that don't play many creatures can swarm now, decks with high artifact or dork ramp can flood with lands too, at effectively no cost. Unlike Ophiomancer, it doesn't care if you got a few out, as long as someone has more. Land Tax makes you spend your land drop on it, and while I wouldn't say cards in hand or deathtouch aren't better, I'd say that this certainly isn't a worse version, just a little different.

Also it's down to opinion, that's fair, just looking at it I am satisfied however for the white card that does a whole lot.

Also frick is Skullclamp busted with it. Not far from like 4 cards a turn and ramp xD

Ehh, I am not as bullish on Keeper as you, but it still is solid. While sac'ing a land to get more landfall triggers sounds good in theory, I am not so sure it is that great in practice. Lands/Landfall decks outside of The Gitrog Monster (whom would be the best home for that kind strategy, but can't play Keeper) win games through sheer mana advantage. Losing your mana advantage for a couple landfall triggers seems pretty bad. Maybe late game it becomes more powerful, but at that point I just want to be casting Scapeshift or sac'ing all my lands to Titania, Protector of Argoth.

The aristocrats idea is likely the route to go, but still not that busted. Ophiomancer has been around for years, and while it is a very strong card, it is not busted.

Keeper is definitely strong and a fantastic addition to white, but it's not crazy.

I agree with the apprehension around generic partners as it is easy to accidentally make a busted one. Still though, I've always liked the idea of partners.

Hey Eloniel - thanks for the comment. These are all valid cards, and a decent number of them have been considered in the past, but ultimately were too clunky for this shell since it's intending to compete in a 75% power meta. I think you would like my K&T deck since it plays some of these, and is intended to follow a similar theme as this deck but for more casual tables. The issue with a lot of these cards is that yes, they follow the theme and game plan, but the impact they make on the game is not large enough to warrant either their CMC, or having to find a card to cut for it, and often both. As you'll notice, my curve is pretty low, and most cards in the deck try to maximize on either a) impact, or b) flexibility in how it can be used in a variety of situations or with other cards in the deck. This style of shell is really pushed for slots, so anything going in has a lot of competition and has to be scrutinized closely.

I may come back and type out thoughts for these cards individually later.

Master of Cruelties and Ophiomancer are pretty good though (the latter moreso). I think I mentioned them in the Flex Slots section - or if I haven't, I have been meaning to.

Also, in case you don't know, Master Warcraft doesn't work how most people think it works. It's actually not as good as it seems. You can't choose who the person attacks, so they'll probably just attack you.

Some cards suggestions: Goblin Grenadiers ==> political remover and you hit one player for 2