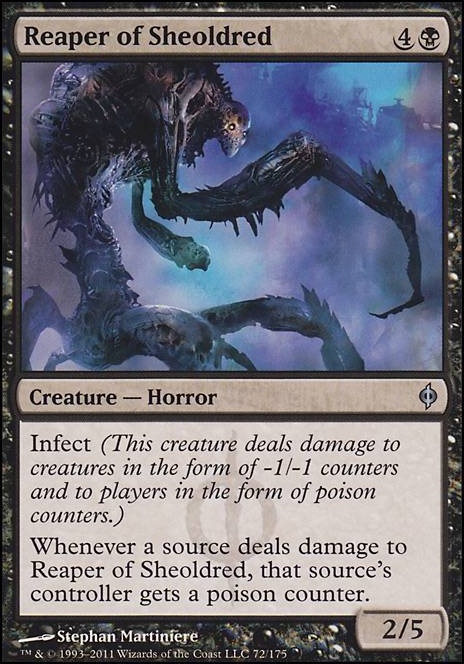 (Whenever a source deals damage to Reaper of Sheoldred, that source's controller gets a poison counter.) 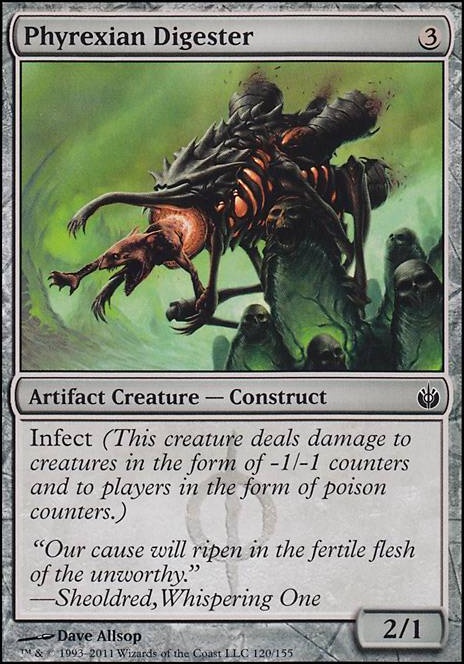 Don't take tappedout's competitive meter too seriously. Yes, I have used it as a kind of yardstick for my decks, but you don't play your decks in a vacuum. You play them against other decks and players. It also doesn't account for an individuals skill. You can have a 100% competitive rating on a deck and still lose to a 50% deck because that person might just be that much better at magic than you. Just some thoughts, and now to the analysis.

Honestly, I would get rid of anything that doesn't contribute to infect, proliferate or ramp.

You need 2 more land, IMO. Upgrade your landbase. You need shocks at the very least, and I would seriously recommend the filter lands.

Reaper of Sheoldred is a good inclusion since even if they get rid of it, they still get a poison counter.

Behind the Scenes is fun since most of the infect critters are low power. Plus, it can buff your board any time.

Dauthi Embrace because making your Blightsteel nigh unblockable isn't stupid.

Muldrotha, the Gravetide might be a good option in the 99 for you, and any Atraxa player, really.

Infect tries to win usually early to mid game, so a few creatures here are for late game and are not going to see too much play. I would take out Blightsteel Colossus and Reaper of Sheoldred as well as Skithiryx, the Blight Dragon, and I don't think that Liliana of the Dark Realms is really helping the deck. Because over half your deck is creatures, cutting the big ones for better cards shouldn't be and issue.

You should be fine with about 15 creatures, so I would keep all your Blighted Agents, and Plague Stingers, along with 3 Phyrexian Crusader, and then having the last 4 slots being taken up with your personal combination of Hand of the Praetors and Viral Drake. I don't want to sound rude but the the rest are space filler

once you've got it down to those creatures, you'll have 22 slots left (i think)

To get the deck to a competitive level, you'll need some removal. Fatal Push, and Dismember work great. I would add in a total on 6 of those in a combination of your choice

Don't underestimate the power of cantrips. Cards like Opt and Serum Visions make your deck smoother, I would add in 4 Opt and 3 Serum Visions

Because your win-con is infect, you'll want to protect your creatures. I would put in 2-3 copies of Dispel, as it protects your creatures from removal and also protects you from burn. You may want a copy or two of Robe of Mirrors as well. Mutagenic Growth may also be a good idea for pumping creatures for the win.

other cards to consider are Thoughtseize, Street Wraith, a copy or two of Ghost Quarter, Mana Leak or Go for the Throat

I also think infect should likely be represented in this deck. I specifically recommend Phyrexian Swarmlord, Reaper of Sheoldred, Skithiryx, the Blight Dragon, Triumph of the Hordes, Phyrexian Hydra, Phyrexian Crusader, Hand of the Praetors, Grafted Exoskeleton, orGlistening Oil

vbcnxm_ on Reaper of Sheoldred and Pariah's â¦

say I have Reaper of Sheoldred equipped with a Pariah's Shield (or just straight up Pariah ) and my opponent attacks me, who gets the poison counter?

Would it be him, since it was his creature that attacked me and then dealt damage to the reaper

Or would it be me, since my Pariah effect redirected that damage?

I really love the idea of an infect EDH deck and I really think Atraxa is the way to go to push everyone over the edge with proliferate. I play infect in modern and more casual decks in EDH. If all your creatures besides mana dorks have infect already, why so many cards that give a creature infect? Do you need to give Atraxa infect consistently? I looked up every card with infect and you can definitely increase your creature count for cheap if you can find them. The link is below. Some notable ones include Reaper of Sheoldred, Rot Wolf, and Lost Leonin. Other than that, Slip Through Space provides decent evasion as a cantrip and any protection from color spells are good at evasion and protection like Apostle's Blessing. Wild Defiance is also a way to get more out of your other spells while protecting from some of the smaller damage dealers.

I think the counter spells are a bit of a waste though. They can be useful, but if you only have 4 in your whole deck, you won't have any consistency with them so I think card draw, creatures, or pump would be better. Also, do you really need the ramp? Your curve pretty much tops out at 6 and most of it are 1-4 drops.

Sorry for the book. I love the direction you're going, just thought I'd add my 2 cents.