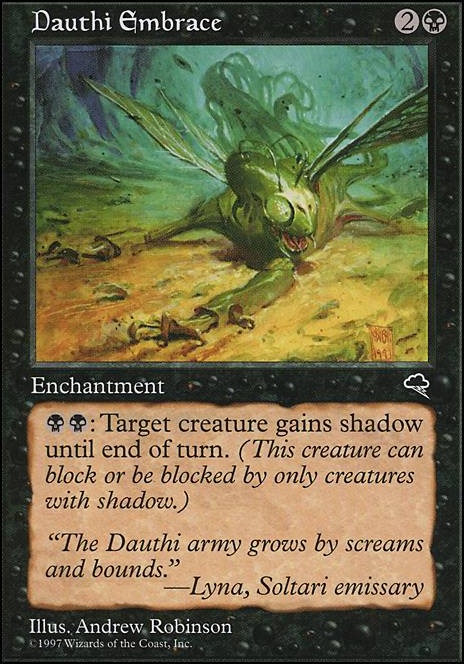 (Black)(Black): Target creature gains shadow until end of turn. (It can block or be blocked by only creatures with shadow.)

Black has a bunch of creatures with Shadow you could look at. Dauthi Embrace maybe but it would only give you 2 mana at the cost of 2 mana.

Pestilence , maybe Lim-Dul's Hex . There are probably a lot of Black cards in any Rakdos, Lord of Riots deck that would work here. Shame all the "tap to cause 1 damage to each player" cards are red.

IMHO, I think you need to swap out some low-drops for evasion, you don't have a lot of bounce/recursion to re-Ninjitsu your big fatties. I'd recommend Key to the City or Dauthi Embrace. Crystal Shard if you want to lean towards more bounce.

I did try infect cards such as Tainted Strike but ended up cutting them. I play Dragon Shadow instead of Dauthi Embrace for the self-recursion.

Love it. I've got a Volrath list myself, threw in some infect to help finish out games. Dauthi Embrace is an especially fun card, and Hatred can win you a game, too.