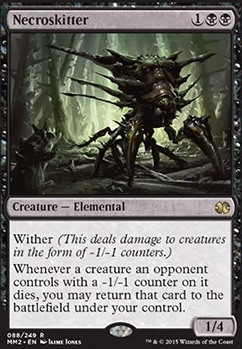 Whenever a creature an opponent controls with a -1/-1 counter on it is put into a graveyard, you may return that card to play under your control.

Venom and Vigor
by liquid_water

Don't You Know that You're Toxic?
by Imperator_in_Chief

Something Wicked This Way Slithers!
by comfortingpain

even snakes get sick
by russangoat

Pretty cool with Hapatra, Vizier of Poisons or Necroskitter , but definitely not worth six mana. Look at the kind of powerhouse enchantments existing at CMC 6 and 7:

And so on and so forth. All of these basically win the game if not answered. Your enchantment definitely needs more power. I like the general idea though.

Whip of Erebos -> Nightmare Shepherd The whip looks better than it actually is. I don't usually attack so the "lifelink" aspect is basically useless. The reanimation effect is too expensive, The Shepherd looks more efficient at what it is supposed to do.

Phyrexian Altar, Tombstone Stairwell -> Ashnod's Altar, Nim Deathmantle The point here is to include an infinite combo with creatures like Sengir Autocrat, Weaponcraft Enthusiast and Chittering Witch. Basically you can keep recasting the creature thanks to the Nim Deathmantle by sacrificing the tokens to the Ashnod's Altar. With a Blood Artist effect on the table is game over. Not the most efficient combo in here, but a solution that may become the backup plan.

This is the closest built from the final version of the deck i had in mind when i started building it. The last two changes would be Phyrexian Arena -> Necropotence and Necroskitter -> Contamination. I don't know If i want to get there because this deck looks pretty good imo as it is now.

tacolover25 I've seen Contagion Clasp used in similar builds, especially when they focus on Infect or are built around Necroskitter... in this build I think it may be too slow, and 2-drop is prioritized for Hapatra, Vizier of Poisons due to that card being targeted relentlessly by removal. Thanks for checking out the build, and also for the suggestion. Cheers!