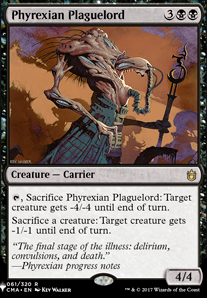 , Sacrifice Phyrexian Plaguelord: Target creature gets -4/-4 until end of turn.

Sacrifice a creature: Target creature gets -1/-1 until end of turn. 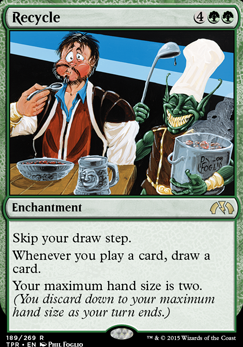 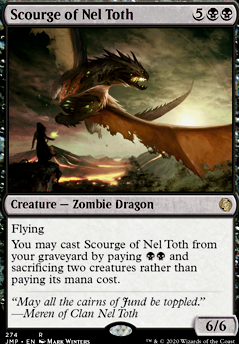 Looking at the decklist after posting, it looks like it fits better with Endrek Sahr. Consider that Phyrexian Plaguelord comes with 5 tokens, Endrek Sahr really tows the line with token makers. I believe I will need to remove a bunch of sac outlets that aren't as good, and shift it over to the token makers side of things.

If anyone has some good suggestions about black or artifact token makers, that would help!

I actually like Phyrexian Plaguelord. I think if your going to voltron focus you should double down with that instead of the aristocrat style. As for the tokens I found these two card heavy hitters as end phase your at minimum giving him +2+2 Virulent Plague Illness in the Ranks. Also worth nothing Hardened Scales triggers off each token since it is a separate trigger each time.

Thank, IrateWarrior. I think I might have gone too ham on the Eldrazi that bring in scions and spawns. There are some good ones, to be sure, but some of the higher CMC ones are probably not worth running. Phyrexian Plaguelord is probably a straight upgrade to Brood Butcher, and is a free sac outlet to boot.

Then, there's the removal suite I'm concerned about, namely, the Fleshbag Marauder crew. I'm not sure they'll work as well as I think they will. Some better utility spells like Return to Nature and such might be better fits.

Plaguelord and attrition helps clear your opponent's board.

Woe Strider is a backup vicera seer that gives you a goat to sac.

Dimir is a free sac outlet that can double as a limited tutor.

Ashnod for the mana and carrion feeder is good because its cheap and free to activate. Maybe it gets big but not the main reason to run it.