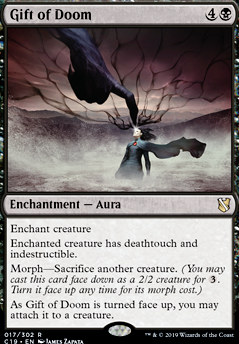 Enchanted creature has deathtouch and indestructible.

MorphâSacrifice another creature. (You may cast this card face down as a 2/2 creature for . Turn it face up at any time for its morph cost.)

As Gift of Doom is turned face up. you may attach it to a creature. 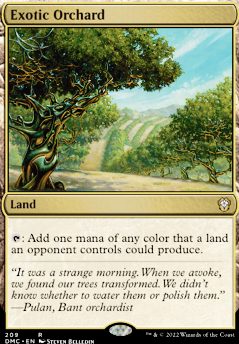 Brokkos, Apex of Forever
by ashby4 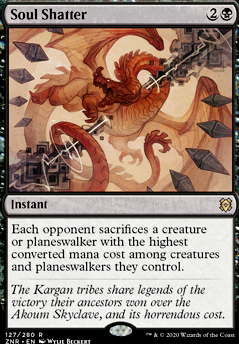 Gift of Doom, Cauldron of Souls, Tetzimoc, Primal Death and Bloodthirsty Blade are propably the best cards you could possibly play in Horobi.

Black has enough wincons. Considering Horobi's ability, doing something spell based or ETB-based seems correct. So Torment of Hailfire and/or Gray Merchant of Asphodel. Another great card that can be both wincon and ramp is Revel in Riches.

What an absolute horror of a deck!

Wondering why no Damnation or Damn though?

There's lots of ways to protect your commander from them too with Equipment or Black cards like Darksteel Plate, Azra Smokeshaper, Daring Fiendbonder, Gift of Doom, Oblivion's Hunger, Professor's Warning, Renegade's Getaway, Rush of Vitality, Unlikely Aid, and Without Weakness.

RiotRunner789 on Advice For Olivia CMDR

Well, she can be competitive but not CEDH worthy if that is what your looking for.

However, in the build:

You want tons of looting effects like Faithless Looting and Frantic Search.

For competivness, fast mana like Mana Crypt and Chrome Mox.

She's expensive, so you want protection and backup. Other legendary vampires, Deflecting Swat, Imp's Mischief, and Gift of Doom.

Thank you very much for all the advice multimedia. Excellent point about having indestructible protection. Iâll definitely be adding Daring Fiendbonder, Tyrite Sanctum, and Gift of Doom.

I donât like tutors in general as they make your games pretty similar. However, I was unable to add as many big body demons as I would like due to budget constraints. Iâll definitely need a graveyard tutor or two to make sure I hit them. It sucks that theyâre so expensive too.

Iâm confused as to the adding sac outlets suggestion. Why would I sac my reanimated creatures rather than leave them alive, and instead have cards to fill my graveyard thereby giving Olivia more targets? If that came off as rude it was unintentional. Iâm worried it may, but I canât think of a better way to phrase it.

Once again thank you kindly for the advice, and if thereâs anything in here you think is a waste of a spot Iâm all ears.

Hey, well done, you have good card sense on a budget. Nice Master of Cruelties and interesting Demon theme.

Board wipes are very popular in multiplayer Commander and a single board wipe really wrecks you unless you can protect a legendary Vampire from being removed. Consider some budget cards to give Olivia or another legendary Vampire indestructible?

Some other cards to consider adding:

Many of these suggestions to consider are sac outlets that way you can take advantage of sacing and then reanimating the same creatures with Olivia especially Master of Cruelties.