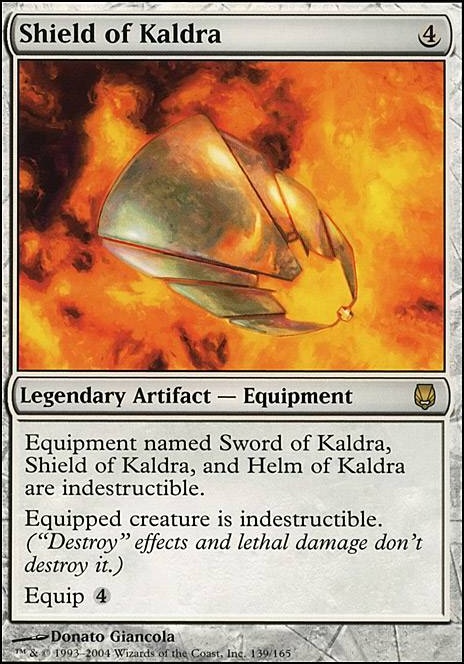 Equipped creature has indestructible. (Damage and effects that say "destroy" don't destroy it.)

Shield of Kaldra occurrence in decks from the last year

Sir Zndrsplt, aka How To Change The Commander Meta
by KorandAngels

Tamatoa, the fab crab
by PungeonMaster

The first time this kind of thing was done was with Helm of Kaldra, Sword of Kaldra, Shield of Kaldra. It was pretty cool to assemble the three equipments and create the Kaldra creature.

The next time they did this was with actual meld cards. Bruna, the Fading Light and Gisela, the Broken Blade turn into Brisela, Voice of Nightmares

Because they're vehicles, they can represent the left and right sides, the top half and bottom half, the attacking part and the defending part, etc. The head and the body. Some kind of duality around mechanical beings.

SimicVisionRy on Is Basri ket a good â¦

I see why you would have the idea; Indestrucible on your commander is useful, espcially when you like to make frequent House calls to your opponents' Command Towers, if you catch my meaning.

I personally wouldn't include it in a Balan, Wandering Knight build, as Darksteel Plate and Hammer of Nazahn are suitable enough replacement esq effects that provide the same benefit, on a artifact body Balan likes to see more than a uppity Planeswalker. Hell, Shield of Kaldra and the whole Kaldra set would be my go to - nothing funnier than just pooping out an colorless legendary thats beefy with all those equipments!

DiesToDiscard Myojin of Cleansing Fire is the only 8-mana spirit in mono-white. It's a pretty necessary card to have at your disposal to kill 8 cmc permanents.

I think I will play it over Deathless Angel or Shield of Kaldra.

The general gameplay of the deck is to use tutors to find Shield of Kaldra and Worldslayer and swing for the win, because itâs awesome.

Of course you can just do Knight tribal + equipment beat down, too.