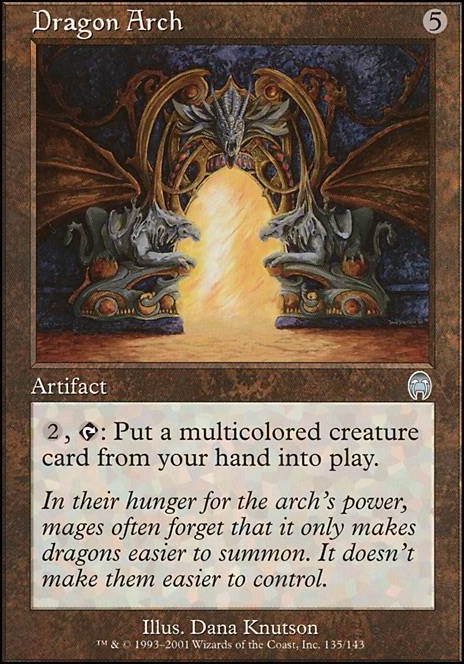 (2), Tap: You may put a multicolored creature card from your hand onto the battlefield.

Dragon Arch occurrence in decks from the last year

Ever thought of Dragon Arch

I am actually running a very similar deck to what you have here. Feel free to take a look at my build. These decks can be blast to run, and if left unchecked, can spell disaster for the table.

First off, I would look to fixing my ramp. My personal preference is focus on my land based ramp because in my playgroup's it is far safer then rocks, because there is very little land hate.

I do ran a few rocks in mine also, just for the fixing.

I would get swap Darksteel Ingot and replace it with Arcane Signet because it does the same and does it a turn earlier.

Also, I would replace the sphere with Wayfarer's Bauble because it does what the sphere does but better because it puts the land on the battlefield, not into your hand.

This one will be a personal choice but I would swap Dragon Arch for Quicksilver Amulet, because the amulet doesn't have the color restriction that the arch does. What happens if you're holding up say Ramos, or someone bounces your commander back to your hand, and you have the four mana open but you can't play either because either because they are colorless. It is nice to pay two and drop the The Ur-Dragon

I would drop Icon of Ancestry for another ramp spell like Skyshroud Claim because your beaters are already going to be bigger and scary then most of the other creatures.

Also, if you can afford it Scourge of the Throne because double attack steps, with huge beaters, is always fun.

Chromatic Lantern and Dragon's Hoard are most includes in this deck, in my opinion.

In a five color deck with an average CMC of almost 5 mana, you need to be able to get as many lands on the battlefield as you can, so that you can hopefully cast Morophon, the Boundless by turn 4 or 5.

Thinking of adding cards like Dragon Arch and Quicksilver Amulet. To get stuff out after epic cards are played.

Hey, this is a really interesting and neat looking Ur-Dragon Deck. I never bought the precon, but did construct an Ur-Dragon Deck from scratch, which did have some difficulties. Anyways, I thought I'd recommend a few cards for you to take a look at, though the choice is ultimately up to you.

Tempt with Discovery is a great card to have, especially if playing with four players. A land tutor that put them into play that grows exponentially when others take the tempting offer. This card has made a huge difference in a number of my games.

Conflux is an interesting card that, when used with Ramos, Dragon Engine

in play, will earn you extra mana while also tutoring for five different cards.

Dragon Arch is an interesting artifact that can help you cheat out many of your dragons. Those can't be countered normally since it's an activated ability, and it may not affect your mono-colored dragons, but this card has also helped me out a number of times.

Vaevictis Asmadi, the Dire isn't the best dragon out there, but he brings some fun chaos to the deck, while also getting rid of threats on the board that may be otherwise difficult to deal with. Especially if you have dragon tokens you can sacrifice to him.

Hellkite Tyrant is a scary dragon to have in play, as it can serve both as a win-con, and as a good answer to someone's artifact deck or scary artifacts in play.

Kilnmouth Dragon is another scary option, that can come in huge, and deal a lot of damage, either through combat or by tapping it. I hope these recommendations help, and once again, I love how this deck looks.

i dont think Sarkhan, the Dragonspeaker is that good. i'd cut it.

12 out of 27 of your creatures are legendary,less than half. i would cut Primevals' Glorious Rebirth

you have 27 items that ramp you (some of whitch i would cut, more on that later.) i dont think Armillary Sphere stands up to most of them. id cut it.

11 out of 27 of your creatures are multicolored. Dragon Arch is good. not saying cut it but on the fence for me.

you realize Bower Passage is bad for you because your flaying creatures cant block our opponents not flying things.

this is not a great dragon period. id cut Intet, the Dreamer

ideally a strategy has 30 of the thing it cares about. you should try to hit 30 dragons dis-including your commander.

last comments. this is your deck. im just commenting what i would do so take it as just that. suggestions.

This deck is a bit too casual. I recommend fixing your manarock base first. Take out Firemind Vessel , Armillary Sphere , and Dreamstone Hedron . Put in Wayfarer's Bauble , Farseek , and Kodama's Reach .

Dragon Arch doesn't work with your deck, because you don't have enough multicolored creatures to really use it. Take it out for Swiftfoot Boots . I think you already have one, and it is super-powerful.

Merciless Eviction is really good, but for your deck, Kindred Dominance is better, and you already own one! Use that, instead.

Take out the following: Enlightened Tutor , Mystical Tutor , and Demonic Tutor . They are expensive and better in other decks for combo and stuff. Not worth wasting money on here. I'd even reconsider Diabolic Tutor , because it costs 4 and wastes time acquiring a card in non-combo, when you want every card to be a value engine, instead of a toolbox.

Upgrades: Consider adding Kiora, Behemoth Beckoner . I will give you a copy of her, as I have like 8 lying around for no reason.