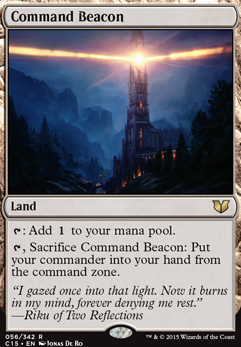 , Sacrifice Command Beacon: Put your commander into your hand from the command zone.

Command Beacon occurrence in decks from the last year

Tayam - You Can Count on Me
by OttersaurusRex

Phage: That Which is Not Dead

VexenX, as you have recently inspired me to find room for more draw in Om_Rath, I have done some testing and I'd like to recommend some ambitious solutions. First, I'd like to touch on some cards that I think have been holding Om_Rath back.

2) Genesis Wave. I gotta say this card looks much more exciting on paper than when you actually play it. And that's IF you play it. First off, Genesis Wave is usually the last card in your hand that you play when you're out of gas. This isn't a bad idea if you need a mana sink and if you have good odds on hitting some bombs. I won't knock the mana sink call, but what exactly are we trying to hit in this deck? In theory, we're playing a deck that has its main bomb for a commander, so most of what you can expect to hit is lands and cheap spells. And in that respect, isn't Genesis Wave often a high CMC ramp spell? The kind of spells we've been cutting from the deck for a while now for good reason? I think it's cuttable.

3) Command Beacon. I get that it's useful to have a late game land, but I think Command Beacon is TOO late game. Every time you sacrifice a land, you sacrifice tempo. Tempo you could use to drop more lands for a real CMD cast or draw spells into real protection for Omnath, Locus of Rage. For ex. just one tutor draw can grab Sylvan Safekeeper and a lot of the time that works better than any Command Beacon loop will. If you're looking for a late game land, I think you want to be in Field of the Dead. I've been absolutely loving it, and it even fills the role of a tiny Doubling Season, keeping Gaea's Cradle, Shamanic Revelation, and Purphoros, God of the Forge perfectly happy even after Doubling Season's removal. This also means splitting your mountains and forests in half to make room for equivalent snow lands.

Off this tangent, I would propose the following changes with a theme of increasing draw, decreasing CMC, and not compromising win cons:

Parallel Lives --> Compost : Compost can be an on or off card, but if we're talking odds, I think it hits enough of the time in enough games to earn a slot.

Return of the Wildspeaker --> Life's Legacy : Same card draw for much less CMC. In both scenarios you will want a 5/5 out anyways. I think it's a great deal.

Command Beacon --> Field of the Dead

And lastly, with the addition of more reliable draw I think Burgeoning deserves to be revisited. You will have more hand states with more lands than you can play in a turn or even two. If you were to make the swaps I listed, I would recommend slotting in Burgeoning over Mina and Denn, Wildborn. I think this is more where we wanted Om_Rath to be in the first place. I believe you only slotted out Burgeoning because the deck didn't have enough consistent card draw. We know Mina and Denn, Wildborn fills a flex spot because it's an expensive Exploration and if all Exploration effects were integral to the success of the deck, we would also be in Wayward Swordtooth. If we're in Burgeoning, I think we should also slot in Ghost Town again. In summary:

I hope you take everything I say with a grain of salt, and at the end of the day I just love chatting about Om_Rath!!!

RNR_Gaming: the deck is not supposed to break any records for optimization or value or anything, I just wanted to know how it could be made possible. Command Beacon-type effects are really what I was looking for, and now I know a few from you all. Thanks again btw, my dream of hella-janky commanders continues!

Not every card is meant to be for commander. There are a lot of hoops to jump through to make make his ability moderately relevant but in black there are much better options if you just care about colors. It would probably play out very similar to Haakon, Stromgald Scourge or a Phage the Untouchable deck. Command Beacon and Netherborn Altar become your bread and butter and everything else is generic black value.