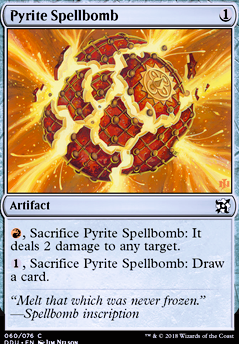 Pyrite Spellbomb occurrence in decks from the last year

What I am trying to decide right now with this brew is to go Chalice of the Void or not. Chalice is obviously extremely powerful, but without chalice, I could lower the curve of my deck and gain access to some very powerful spells like Path to Exile, Lightning Bolt, Judge's Familiar, and Pyrite Spellbomb.

Oh, that's a cool interaction. Aether Spellbomb would additionally allow board control, and those combined with Nihil Spellbomb would allow me to draw way too many cards. Mishra's Bauble, but 12 copies that also do other things, even if they cost a little more. Also beats T3feri.

Thopter Foundry and Sword of the Meek would be fun too.

Pyrite Spellbomb could be nice but I'd rather have flat bounce from Aether. Course, I do have a lot of the fixing for splash already, so I might consider tacking Red in for additional effective removal, including Pyroclasm and Galvanic Blast.

Hi! Maybe I'm missing something but I don't see the loop with KCI. You have both Scrap Trawler and Myr Retriever but if I'm correct you need another piece to loop Pyrite Spellbomb, something like Workshop Assistant. However, and considering I'm not the best combo player, I think I must be missing something!

Next you're going to sing the praises of Mind's Dilation .

Any way you slice it, Sunbird's Invocation is a card advantage engine. Its resource intensive to get onto the table, and requires further resources to do anything (spells in hand, mana to use said spells). It performs better with higher CMC spells, which makes it harder to cast multiple spells and get multiple uses. Are the free spells nice? Certainly. Stuffing your deck with cards you wouldn't play except when they're free means you're going to be spending a lot of time feeling extremely stupid when you don't see the 1 card that makes them worthwhile in your hand of 7 cards in a 99 card deck.

For example, Char does more damage than Lightning Bolt . Slotting char over bolt in your 99 because you're also running Sunbird's Invocation is extremely poor deck building. The card incentivizes you to run junk to get better triggers. Even in a casual deck I wouldn't recommend running junk cards to work around a card that isn't the commander.

Now compare Sunbird's Invocation to a similar CMC card, Sun Titan . Sun tit gives you a trigger when it enters. It can attack and block (with vigilance!), helping most casual deck game plans. It continues to get triggers turn after turn BY ITSELF, requiring no further resources or mana spent, just requiring cards in graveyard (which happens naturally as any game progresses). Sun tit doesn't ask you to run jank cards with higher CMC, it prefers to recur right in the CMC range you want your value cards to be.

Another way to think about this is opportunity cost. If you were playing any game of magic, and you had Sunbird's Invocation in hand, would you rather have a different card in your hand? This is opportunity cost. 6 CMC is pretty high, it means the card will sit in hand during the early game, whereas you COULD have slotted a different card that may have been applicable during that period. For example, if you replace Sunbird's Invocation with a Swords to Plowshares , is your deck going to function better in more match ups? The answer is almost definitely yes. Switch out StP with some other card your deck needs, and you've found out what your deck should slot instead of Sunbird.

Now lets imagine yet another situation. You've got your Sunbird in play, you untap with a fresh new turn. You cast a spell for 5 CMC. You get all giddy, and you flip up Mountain Mountain Shock Mountain Pyroclasm . Just because you went 5 deep into the deck with a 5 CMC spell doesn't mean you're going to get anything relevant, or anything that will be useful to your current board state. Similarly, with 1 or 2 CMC spells, you may hit exclusively lands and brick out. There is no guarantee that these triggers will help you, or give you the relevant cards you want to see. Its just a card advantage engine for red at 6 CMC.

Another aspect of Sunbird is that it promotes non-reactive deck building. Flipping Counterspell with Sunbird isn't going to help you, unless you're intentionally holding spells to use Sunbird trigger in response to someone else's spell. Your removal and interaction is going to want to be permanent based to take best advantage of Sunbird. I'm not saying this is good or bad, but certainly opens you up to being locked out where a spell wouldn't be locked out. A great example of this is slotting Goblin Cratermaker for removal, and having it die as a state based action upon entering if an opponent has Elesh Norn, Grand Cenobite . Another example Pyrite Spellbomb being locked out against Null Rod .

Sure, this card generates advantage when you're left alone to durdle in your ivory tower, but Scute Mob can one-hit-kill players on turn 30 after getting a bunch of counters. That doesn't mean Scute Mob is a good card in commander.

There's really no point to Arcbound Ravager or Walking ballista in Emry decks. They make the deck's play patterns and draws much less consistent and the deck already has massive issues against any deck with any decent amount of interaction or disruption. Jund, Eldrazi Tron, and Burn pretty much all smash the Emry concept at the moment and these are probably the 3 most common decks in the meta. An Emry deck certainly can't afford to sacrifice consistency of it's turn 2 wins to apply the type of plan you're working toward. I've tried a number of different things with Emry decks at this point and the best bet is to play Paradoxical Outcome and Urza lines in tandem with Emry. This gives the concept a solid mid range line to take with huge constructs, a sort of storm line to take based on the Outcome options, as well as the Emry lines being slightly enhanced in terms of being able to be found much more consistently after turn 2 and 3 when the deck doesn't have an ideal opener.

Force of Negation is probably a must run 4x card to at least have some degree of protection given how vulnerable this deck's primary game plan is, Pentad Prism is amazing at being a mana fixer, ramp, and crazy good synergy with Outcome lines as it's mana positive post bounce with Urza in play, and win conditions should be something simple like a single Elixir of Immortality and a Pyrite Spellbomb . Looped spellbombs win the game, looped Urza casts make an infinte army of constructs (Nexus of Fate usually being the way those decks assure themselves of getting the combat step they need without access to haste, although there are options to give haste to creatures that are viable as well), and non summoning sick Emry's on a board where the opponent has no blocker wins, some variants run a singleton Lab Maniac. No need for Ballista or Ravager in the game plan at all when it only detracts from optimal deck operation. I've tried the concept with and without cantrips and to be honest the concept performs better without them at all and instead relying on Outcome lines if it has to find a win.