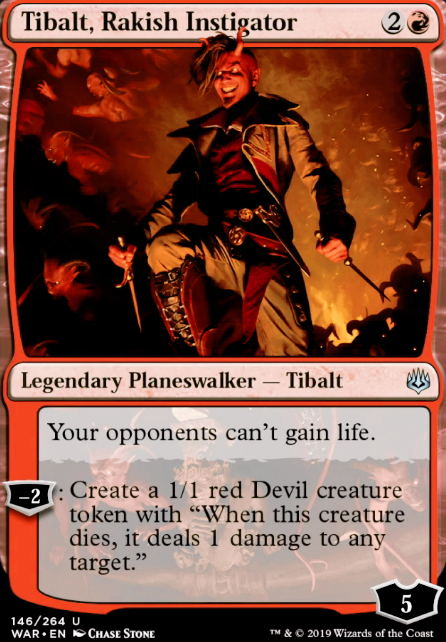 -2: Create a 1/1 red Devil creature token with "When this creature dies, it deals 1 damage to target creature, player or planeswalker."

how about Tibalt, Rakish Instigator for sideboard options? I feel it fits the theme of your deck better than Leyline of Punishment

Would you consider swapping Angrath for Tibalt, Rakish Instigator? Lower CMC (even if it's specifically red), has an effect that stops the opponent from slowing your burn, and does the same thing as Angrath but goes wide instead of big which is probably better considering you're playing Superfriends, and they also deal burn damage.

I also adore hydras and I am certainly aiming to shift this deck more in favour of them!

Now that you've brought up Rhythm of the Wild I'm super hyped to slot it in, the haste in particular is spicy with huge hydras but the flexibility that it offers is key to its awesomeness too.

Hungering Hydra , Primordial Hydra , Kalonian Hydra , Rock Hydra and Polukranos, World Eater fit the deck amazingly as well and I'm genuinely just going to slot them in right now. Managorger Hydra as well is an excellent early game drop that can get really insane if your opponent's ignore it so I'll bring it in as well.

Ferocity of the Wilds also fits the deck really well, but I think I'll pop it in the maybeboard, simply because I've run out of room for it! Tibalt, Rakish Instigator and Sarkhan the Masterless are also super interesting planeswalkers that I'll be sure to test thoroughly!

Unbound Flourishing is a really good enchantment for this deck, especially regarding your X cost spells. Rhythm of the Wild and Ferocity of the Wilds will help your Hydras beat your opponent's face in even harder. Managorger Hydra , Hydra Omnivore , Polukranos, World Eater , Tibalt, Rakish Instigator and Sarkhan the Masterless are also good additions to the deck. Hungering Hydra , Primordial Hydra and Kalonian Hydra are also good Hydras for this deck. Rock Hydra should also be in here.

I love Hydras and I hope you take these into consideration!

I understand tinkering with the deck, but I think some of the changes you've made aren't good. Ionize is one of the best spells for Izzet colors, and you've replaced it with two less good counterspells ( Negate and Devious Cover-Up ). Ionize is cheaper than cover-up, more flexible than negate, and it deals two easy damage on top of that.

And then a couple of cards I like, but need to be kept low (two or less) in the deck. Thousand-Year Storm is good, but you've got a large mana-curve already. I might even make that a one-of. Pretty much the same with Murmuring Mystic , but two would be fine there. Invade the City is good, giving you a beefy blocker to help you stall, but you aren't likely to play it on turn three, since you only have a few instants/sorceries that come out before that turn.

Now, since you seem to have started to refine the maindeck a little, let's work on the sideboard. Fry is an obvious card, given the amount of burn in the maindeck and how often it's used in sideboards. Two or three of those, probably. Aether Gust and Mystical Dispute are both good here. I like the versatility of Reckless Air Strike , and if your local meta has lifegain in it you might try Tibalt, Rakish Instigator .

Ah sorry, I linked the wrong card in the heat of writing. For that case you could use Tibalt, Rakish Instigator .

The Bucaneer came to my mind as well but Im short on wild cards myself.

You could include Vance's Blasting Cannons  Flip in the deck since it will act as a second copy of outpost siege and can flip into a land to do some extra damage if you need it to.

Maybe Tibalt, Rakish Instigator would be a good add for another opponents can't gain life effect while also ending up with bodies that are pretty much bolts when they die.

Also if you can afford it then Valakut, the Molten Pinnacle will turn your lands into lightning bolts. (They wouldn't get the extra damage from your commander since lands are colorless)