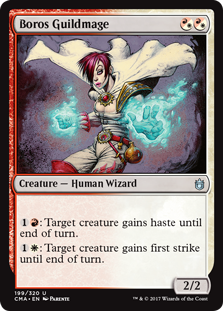 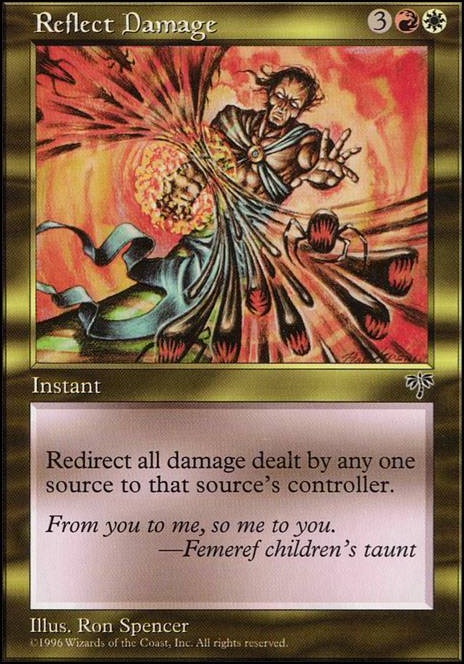 Norn's Annex has been performing very well for me. I had a couple games where it made me unassailable for huge armys of small creatures, Animar playing Morphs springs to mind, or just made me an unattractive target because they would be so low on health they would die from the other opponents after finishing me off.

Akroma's Memorial is an awesome card I wish I had room for still but it never performed all that well and in Boros I sadly have to really decide if a card is worth it, or if my determination is high enough if it isnÂ´t, to run. Cutting Boros Guildmage for the awesome Smothering Tithe for example is a good tactical choice but hurt a bit cause I really like the girl.

Avacyn, Angel of Hope is just an instance of my self restriction with deckbuilding. I pulled an Archangel Avacyn

Flip from my Shadows over Innistrad Prerelease prize packs where I went 5:0 with a friend in 2-Headed, so I really wanted to use her and cut Avacyn for angry Avacyn. Akroma being the exception here cause Akroma, Angel of Fury being from an alternate reality in Planar Chaos.

The card I would cut, despite the obvious flavor win, would be Boros Guildmage. Its abilities are too Mana intensive for the earlier game, when you want to be developing your board, and aren't impactful enough in the late game. And if you don't use it's abilities, it's just a vanilla 2/2, while Runaway Steam-Kin will grow itself over time simply from casting your spells.

Hmmmm, let's address some of these ideas.

What about replacing the Gilded Lotus with a Dreamstone Hedron instead? Sure it's a touch more costly but it also gives us a card draw action as well which could be damn useful.

I've actually been wanting to replace the Traitorous Blood it'll probably get swapped out with a True Conviction the manticore is pretty cute but i'll pass on it since he doesn't have haste.

Boros Guildmage and Hellrider are also on the chopping block as well so Ranger of Eos and Figure of Destiny would be welcome additions. Victory's Herald is a new shiny but I can see the argument for replacing her with another of the 1 CMC cards.

OK, So here are some of my initial reactions:
Consider replacing the Gilded Lotus with a Worn Powerstone.
Also, the Traitorous Blood is kinda cute if Brion Stoutarm is in play, but you don't have enough other 'borrow' or sacrifice effects to really make it effective. Maybe replace that with a Conquering Manticore instead. The 5/5 body doesn't suck.

However that leads me to one of bigger problems. Your mana curve is pretty high. You don't really start hitting until you get to the 4-5 mana range. I know this is EDH, but still, might want to bring that down a bit. Let consider some helper cards.
Consider the following: Weathered Wayfarer, Figure of Destiny, Slumbering Dragon, Dragon Hunter, Mother of Runes are all fetchable with a Ranger of Eos.
Boros Guildmage, Victory's Herald, and Hellrider seem a bit weak in this deck.

Hi Venom_Pistachio, thanks for the comments on Kaalia, Mirror Breaker EDH

Here are some potential cuts:

Grim Discovery | Return to the battlefield is better, skips the Kaalia of the Vast requirement

Ruthless Ripper | He's too small, and not going to do much for you

Vessel of Endless Rest | Planning to infinite combo this?

Congregate | Rarely going to be too valuable / too situational

Boros Guildmage | Use a Dragon Tempest or something, creatures too easy to remove, and mana sponges

One or a couple of these should get you Kiki-Jiki, Mirror Breaker in there.

Angel of Despair destroys a permanent for about $3, good with Panharmonicon as well.

Swiftfoot Boots better way to get haste (and hexproof) for equip 1, better than Boros Guildmage

Anguished Unmaking is a great permanent exile, think Purphoros, God of the Forge or along that lines

Zealous Conscripts can go infinite with Kiki-Jiki, Mirror Breaker (same as Restoration Angel), for about 50 cents