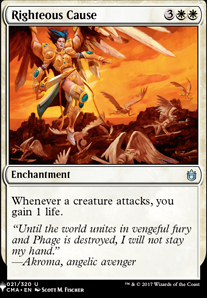 Whenever a creature attacks, you gain 1 life.

Righteous Cause occurrence in decks from the last year

Squirrels! And other tokens
by Cloverbee

Life is a Resource

I can see where Phyrexian Processor would be good, I just don't know how I feel about 4 mana pay 10 life, survive a turn cycle and spend my next turn activating it. Late game it is probably much better, I'd have to think of what it would take up.

I did have Aetherflux Reservoir in the deck on the concept of separate life triggers seems very strong with Karlov. I ended up cutting it for Righteous Cause because it seemed like it would create far more separate triggers to accomplish the same thing. Being able to 50 someone is satisfying though so I may have to revisit it.

Survival Cache seems really good with Karlov out, but not as strong without him on the field. I tried to slot my card draw into repeatable effects throughout the game, along with being easier to bring back should they get removed.

I'd certainly welcome suggestions for cuts for these cards though and thanks for checking out the deck!

Ripwater Yea! They really did, I was so surprised! They worked out so well, I gotta thank you again!

ManaPickler OMG I have never seen Shattered Angel before and now I definitely want to add her! I always had an issue with Blind Obedience cause I could never have enough Mana for the Extort. But I think you're right: if I cut down some of the higher mana costing cards, I could probably streamline the deck a little more. Though, recommending me High costing cards dont help XD Def gonna look into Righteous Cause : I didnt realize that its ANY creature that attacks.

And to the both of you: Honestly? With all the good stuff coming in from M20, as well as some Juicy bits from Modern Horizon's I may just end up cutting most of the extra combo pieces: I only need at least 1 or two to go with Exquisite.