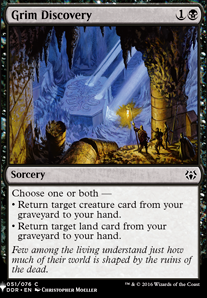 They Said It Would Never Work
by RangersGuild

See this is why itâs good to ask for advice! Let me go through your suggestions one by one.

1) Iâm not sure, so correct me if Iâm wrong, but I donât think I could sacrifice Dark Depths to itself via Exploration to trigger Marit Lage. Iâm leaning toward No because the card specifies âWhen Dark Depths has no ice counters on it, sacrifice it.â Even though itâs a card subject to the Legendary rule, I think theyâd both enter the battlefield with ice counters. Again, I could be wrong (and if I am, please let me know!). But I think youâre right about not running Exploration anyway.

2) As for Entomb, I included that as a tutor to acquire either Dark Depths or Thespian's Stage. Then I can grab them from the graveyard using Grim Discovery. In a pinch it could also locate and grab any of the creatures with the same process. Iâm leaning toward keeping them in, at least until further playtesting.

3) Makes sense about removing Spoils of the Vault too; I already have the superior Demonic Consultation so I suppose I can cut it in favor of Ancestral Recall (I keep forgetting that card exists. What irony XD)

4) Is Crop Rotation really all that useful? I guess I just canât see the value. Since it costs a green even if I use it to sacrifice the land i just tapped to cast it, have I really gained an advantage? My mind canât quite put together itâs usefulness. Help me understand better how it works or why itâs so good.

5) As much as Iâd love to include more copies of Vampiric Tutor, itâs restricted:/ I could add Imperial Seal, that sounds like a plus. Grim Tutor sounds too slow (plus I donât own a copy).

6) I think the mana producing creature Urborg Elf is really good, I donât know why I should remove it here. It can chump block and help pay for the means to find and assemble my pieces for Marit Lage. Is it really bad to have the elf?

Dude, Rotting Regisaur looks nasty! Liliana, the Last Hope would be a great fit when I've got the $$$ for some more magic cards! lol.

Experimenting with new removal spells all the time. I've had both Fatal Push and Spark Harvest in the deck and like them both.

You're right about Soul Stair Expedition being slow. I had a bunch of crack lands and thought it might be worth a try. I'm currently trying out Grim Discovery. Think it will be nice for digging a Stitcher's Supplier or a Carrion Feeder AND a crack land for the Bloodghast. Limited testing on that card.

I play on MTGO, so these decks are changing often!

Have quite a few play hours in. Deck runs really well.

Thanks for the advice buddy!

I don't usually do sideboards for my homebrew Pauper Decks as they're more for me and my friend's casual games. But I would definitely fun some Relic of Progenitus, Naturalize, maybe a Doom Blade or two, perhaps more Gurmag Angler or Greater Mossdog you have to be careful though because playing this deck I've learned that if you get too greedy with the graveyard filling you will have nothing but Stinkweed Imp to cast, and they unfortunately make the problem worse. This deck could use some more cards with flashback Gnaw to the Bone could be great for sideboards, or simply just more ways to refill the hand. possibly Grim Discovery or Disentomb. I personally love Macabre Waltz, but it does have a CMC of two. Disentomb can hit two zombies which is perfect for both Putrid Leech and Gurmag Angler.

FrogFoEva, yeah those are good suggestions, you can also have Torpor Orb are draw Phage into your hand using Command Beacon, or even use Sundial of the Infinite. I believe you can also destroy Phage as it enters play to remove it before it loses you the game, and then you can use Grim Discovery or something else you might add in to get it back. I'm still a little new to Magic so maybe this are wrong but I just built this list using a combination of other lists I found and popular black cards.

bobpuluchi I have sort of the same deck. Try adding Grim Discovery , it combos with Archaeomancer and Memorial to Folly . Also I like Rise from the Grave , Rescue from the Underworld and Extract from Darkness for some triggers. +1 really liked the deck.

Wow, cool deck my friend! May I suggest Grim Discovery so you can bring back your treefolk and harvest more lands?

erm at the moment you can't trigger delirium as you do not have 4 card types in the deck! Add some sorcery cards and some artifacts to help.

Traveler's Amulet is a nice self sacing artifact

I would recomend Nameless Inversion over some of your other instants as it is removal/ pump spell but tribal is one of the card types that can trigger delirium.