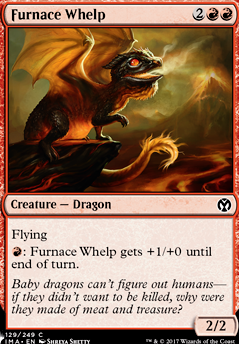 Magic the Galloping - Friendship is Magic
by Lexx_Overkill 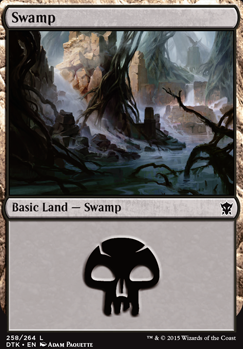 I was thinking of throwing in Dragon Whelp, Furnace Whelp, and Dragon Hatchling. Although, I'm not sure what I'd take out.

I agree Firebreathing should go because I never have the mana free to use it, so that's gone. Sengir Vampire was there for his ability to keep getting stronger and cheaper CMC than the dragons, but I'm probably better off removing him and Furnace Whelp for Thunderbreak Regent (which I tend to do when sideboarding) and more removal for the cheaper cards. I do have Blightning and Slaughter Games but I took them out when I was adding creatures. They're probably going back in.The reason I have Archetype of Finality is to give the dragons deathtouch for their abilities that can hit opponent's creatures. Stormblood Berserker also hasn't been that useful but I thought he could be able to protect me earlier with Lightning Bolt and Tormented Soul to get damage in for his Bloodthirst. Are there better lower cost cards I can replace it with?

You have close to an average of 5 CMC, 30 lands is simply not enough. The fewest lands I run in any EDH deck is 33 for this I would shoot for 37. You are going to need that consistency between 5 colors and high costs. It won't be easy but you will want to eliminate dragons. Try to figure out which dragons are kinda meh compared to others.

Some of my thoughts for removals are Archwing Dragon, Boneyard Scourge, Broodmate Dragon, Dragon Hatchling, Dromoka, the Eternal, Furnace Whelp, Harbinger of the Hunt, Hivis of the Scale, Shockmaw Dragon, Teeka's Dragon, Territorial Hellkite, Tyrant's Familiar. I have not played dragons but these seems the most underwhelming.

TypicalTimmy on Useing a tap ability while ...

The above-mentioned situation is correct.

Gideon's Lawkeeper, as a blocker, does not need to tap. However, she can still activate his ability to tap him. Here in lies the problem.

When she declares him as a blocker, Furnace Whelp must have already been declared as an attacker. Therefore, in order to do such a feat, she would have needed to tap him prior to combat (During your 1st main phase). But, at this point, I am unsure on whether or not Lawkeeper can block, since he is now currently tapped.

Therefore, a better question is; Can Gideon's Lawkeeper block if I already tapped to activate his ability?

JerichoDarkstar on Useing a tap ability while ...

Also, remember that you can link all cards in your question with double brackets: